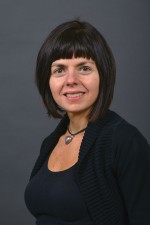 Dr. Olivia Gabor-Peirce is professor and advisor of German in the Department of World Languages and Literatures at Western Michigan University.

Gabor-Peirce is from Transylvania, studied French and German literature, lived and studied in Germany and Switzerland, and received her Ph.D. from the University of Michigan with a specialization in modern German drama.

She served one year as language program director in the Department of Germanic Languages and Literatures at the University of Michigan. She has taught all levels of language and literature at Western Michigan University since 2002.

Her first book, "The Stage as 'Der Spielraum Gottes'" (2006), deals with the representation of God on the stage in 20th century German theater.