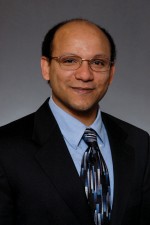 Dr. Mustafa Mughazy is an associate professor of Arabic and linguistics in the Department of World Languages and Literatures at Western Michigan University.

Mughazy is the author of "Dardasha: Introduction to Egyptian Arabic" and the editor of "Perspectives on Arabic Linguistics XX," in addition to a series of articles and book chapters.

He was on the program team for the annual Kalamazoo World Languages Film Festival that was held every March on WMU's main campus. The six-day competitive event was dedicated to the presentation of original creative cinema from Arabic, Chinese, French, German, Japanese and Spanish-speaking cultures around the world, with the movie subtitles in English. The films competed for the Gold Kazoo prize.

Mughazy was the recipient of the 2019 College of Arts and Sciences Faculty Achievement Award in Research and Creative Activity.