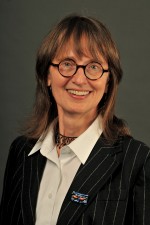 Dr. Cynthia Running-Johnson is a professor and advisor of French in the Department of World Languages and Literatures, with a joint appointment as professor of Gender and Women’s Studies at Western Michigan University.

A specialist in modern and contemporary French literature and theater, Dr. Running-Johnson has taught a wide range of courses at WMU since her arrival in 1986. They include French cinema and theatre as well as French language, literature and culture. She has regularly led WMU study abroad programs to France since 1989, founding the summer program in Lyon and serving on the committee that established WMU's semester-long program in Besançon. From 2003-12, she was chair of the department.

In her research, Dr. Running-Johnson has focused on questions of culture, language and gender in literature, performance and the visual arts. She has written articles and contributed to books on French theater and literature. In recent years, she has been studying the creation of individual theater productions on site in France. She is currently writing about the role of the spectator in theatrical communication and about the highly-developed system of government support for theater in France.