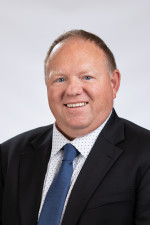 Dr. Decker Hains is the chair of the Department of Management. Hains previously served as the Professor of Military Science and chair of the Department of Military Science and Leadership from 2012-2016 and on the faculty in both the Haworth College of Business and the College of Engineering and Applied Sciences from 2016-2021. He also helped lead the effort for the redesign of WMU’s essential studies program.

Prior to joining WMU, Hains served as an officer in the U.S. Army, holding a variety of leadership positions including Deputy Commander for the Walla Walla District, U.S. Army Corps of Engineers, Chief of a Military Transition Team in Baghdad, Iraq, and assistant professor in the Department of Civil and Mechanical Engineering at the U.S. Military Academy, West Point, New York. In September 2016, he retired from the U.S. Army as a Lieutenant Colonel with over 22 years of service. Hains received numerous military awards including the Bronze Star Medal, the Meritorious Service Medal, the Iraq Campaign Medal and the Korean Defense Service Medal.

In November 2019, he was named a Fellow of the American Society of Civil Engineers and was awarded their New Faculty Excellence in Teaching Award in 2007. He has published numerous papers on leadership and the civil engineering profession. He is a registered Professional Engineer and Project Management Professional.