Israeli soldiers to talk about their experiences 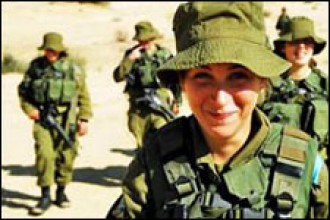 KALAMAZOO-- Two Israeli soldiers will talk about their experiences in the military at a free, public event at 7 p.m. Monday, Feb. 20, in Room 105 of the Bernhard Center at Western Michigan University.

Soldiers Itzik and Jossie will share personal insights on serving in the Israeli Defense Forces.

Itzik and Jossie are part of Israeli Soldiers Speak Out, a program featuring reserve duty Israeli college students who talk about the Israeli-Arab conflict, giving a human face to the IDF. In addition to IDF service, they are graduates of the StandWithUs Israeli Fellowship, a public diplomacy program that selects and trains 150 student leaders each year from six Israeli universities. Based in Los Angeles, the organization has 15 chapters and offices across the United States, Israel, France and the United Kingdom, including Chicago and Detroit.

The WMU event is sponsored by StandWithUs and by WMU registered student organizations Hillel@WMU and Outspoken.