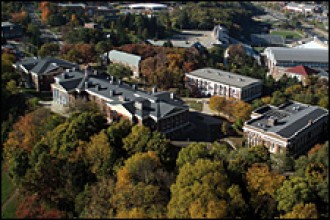 The cost of redeveloping the four structures is pegged at $55 million to $60 million or about $200 per square foot—about twice the cost of new construction for such facilities. 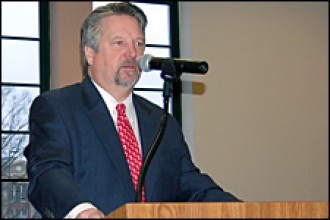 "Without tax credits, it becomes very difficult to make financial sense of a development like this," Doran said. "It would mean hotel rooms and apartment rentals would need to be at about twice the rate for similar properties in the area."

Because cars were not part of the equation when East Campus was built, Doran explained that preliminary plans call for a 450-stall parking structure to be built into the east side of Prospect Hill, with the top part becoming a landscaped feature that would part of the hotel.

In response to one impassioned audience member who pleaded that any renovation not remove the remaining set of columns on the facade of East Hall, Doran responded that not only do plans call for the columns to be retained, but also for restoration of the other two sets of columns that have been removed over the years.

"Putting those columns back up and restoring East Hall to its original design has been part of every set of plans during the process," Doran said. "This will be something short of a top-down historical renovation, but we can confidently say the public and the University will be well pleased by the final product."

The site is at the top of Prospect Hill overlooking Kalamazoo's downtown area. Building on the site began in 1904, shortly after the University was founded as Western State Normal School. The campus, with East Hall as the oldest and most visible of the facilities, was once dubbed "the Acropolis of Kalamazoo" by humorist Will Rogers.