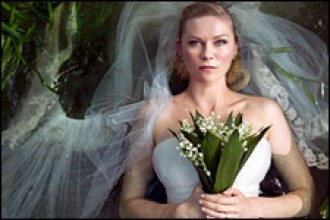 "Melancholia" is the latest film from director Lars von Trier. Kirsten Dunst stars as a young bride named Justine, a role that garnered her a Best Actress win at the 2011 Cannes Film Festival. Justine's world, nay the earth itself, is thrown into chaos by the imminent approach of a new stellar body—a previously unknown massive blue planet that could mark the end of life as we know it.

"Melancholia" has a run time of 136 minutes and is rated R for graphic nudity, sexual content and adult language. The film, released in May 2011, is shown in English.