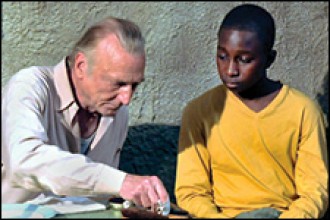 In this warmhearted portrait of the French harbor city for which the film is named, fate throws a young African refugee into the path of Marcel, a well-spoken bohemian who works as a shoe shiner. With innate optimism and the unwavering support of his community, Marcel stands up to officials doggedly pursuing the boy for deportation.

Written and directed by Aki Kaurismaki, and starring Andre Wilmas, Kati Outinen, Jean-Pierre Darroussin and Blondin Miguel, "Le Havre" is not rated. Released in September 2011, the film has a run time of 93 minutes and is shown in French with English subtitles.

For more information, visit kalfilmsociety.net, contact the Kalamazoo Film Society at kalfilmsociety@yahoo.com, or call the Little Theatre movie line at (269) 387-8221.