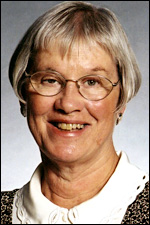 Hazel L. Starcher, a fixture in Western Michigan University's College of Health and Human Services for more than 25 years, died Feb. 2 in Kalamazoo. She was 79.

Starcher was the first employee to be hired when the college was being created in 1976 as Michigan's first interdisciplinary health and human services college and one of just a handful of such colleges in the nation.

Starcher was well known for her professionalism and many talents, especially her organizational and management skills. Those skills were invaluable throughout her tenure as the College of Health and Human Services grew.

A talented writer and editor, she launched as well as managed the college's publications program and Human Connections alumni newsletter, which received a national excellence award in 1993.

Other major accomplishments included managing fundraising for the Bill Burian Memorial Lecture Series and serving as president of the WMU Commission on the Status of Women, through which she co-conceived the Woman Researcher Conference and coordinated several of the conferences.

Starcher chaired multiple committees for the Administrative Professional Association, in addition to leading, planning and otherwise participating in a wide variety of professional and volunteer groups and projects on campus.

Active in the broader community, she served as president of the YWCA board and as chair of the Greater Kalamazoo United Way's Allocations Committee. In addition, Starcher was a board member of Planned Parenthood, Hospice of Greater Kalamazoo, the Kalamazoo Network and the Kalamazoo Chapter of the National Organization for Women.

She was named Woman of the Year by the WMU Commission on the Status of Women in 1984 and received the WMU Distinguished Service Award in 1994, the YWCA's Genevieve U. Gilmore Volunteer Leadership Award in 1995, and Planned Parenthood's Fannie Walton Award for Dedicated Service.

Starcher earned a Bachelor of Arts degree from the Memorial University of Newfoundland in St. John's, Canada. She first worked at WMU early in her professional career, serving as administrative secretary in the Department of Music from 1960 to 1966. Her background also included seven years as a research coordinator and administrative assistant to the medical faculty at Memorial University of Newfoundland as well as secretarial positions at Washington State College and businesses in Ohio and Michigan.

No memorial service is planned. Memorial donations may be made directly to the College of Health and Human Services by contacting the WMU Foundation office. Visit lifestorynet.com to make a memorial guestbook entry.