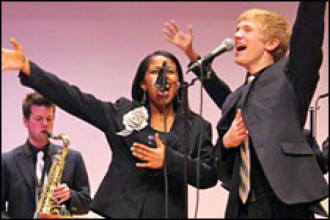 KALAMAZOO--They've done it before. But not quite like this.

For the second time in the past year, Western Michigan's acclaimed vocal jazz ensemble Gold Company will hit the stage at New York's famed Jazz at Lincoln Center as part of the New York City Jazz Festival. After knocking the socks off festival-goers a year ago, Gold Company was asked to do it again this year on Sunday, March 4.

But there's an added twist this time. Joining the ensemble will be nine-time Grammy Award-winner, multi-instrumentalist, bandleader and composer Paquito D'Rivera, who performed with Gold Company last November in Miller Auditorium. D'Rivera, who was featured last fall as part of the new "Jazz Masters at Miller" series, shared the stage with Gold Company and the University Jazz Orchestra.

A funny thing happened at that concert. On-stage banter between D'Rivera and Gold Company director Dr. Stephen Zegree resulted in the jazz luminary's impromptu offer to perform with Gold Company at its upcoming Lincoln Center gig.

"He's just a hilarious person and has tons of stage personality," says Zegree, WMU's Bobby McFerrin Professor of Jazz. "Somebody had told him that we were going to be performing at Jazz at Lincoln Center, and while we were on stage, he said, 'Man, I heard you guys are going to be at Jazz at Lincoln Center. I really dig what you guys are doing.' I said, 'Great. Do you want to join us?' and he said, 'Sure!' "

And so it came to pass that D'Rivera, the only artist to have won Grammies in both the classical and Latin jazz categories, would perform with Gold Company at its second Jazz at Lincoln Center concert.

"The students will have a wonderful challenge to go toe-to-toe with a world class artist," Zegree says. "To say they're excited would be an understatement."

Visit wmugoldcompany.com to learn more about the group.