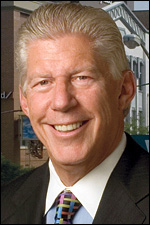 KALAMAZOO--William D. Johnston of Portage, Mich., and Jeanne Carlson of Novi, Mich., have been elected to serve for 2012 as chair and vice chair, respectively, of the Western Michigan University Board of Trustees.

The election took place at the Feb. 29 meeting of the trustees. All officers serve one-year terms. Johnston replaces Trustee Dennis Archer of Detroit, who remains on the board.

Johnston, who was appointed to the WMU board by then-Michigan Gov. Jennifer Granholm, has served as a trustee since 2007. He is president and chairman of Greenleaf Companies.

Johnston entered the field of investment management in 1985 after spending 16 years as a teacher, coach and high school principal. Today, his companies include Greenleaf Trust, Greenleaf Holdings, Greenleaf Ventures, Greenleaf Hospitality Group and Greenleaf Capital. Johnston is chairman of Southwest Michigan First and serves on the boards of the Bronson Healthcare Group, Donald and Genevieve Gilmore Foundation, Special-Lite Corp., Softech Inc., HUMANeX and the WMU Foundation. In addition, he serves on a variety of community boards of directors.

He earned a bachelor's degree in public administration and a master's degree in political science from WMU. In fall 2010, he was named a winner of the WMU Alumni Association Distinguished Alumni Award. 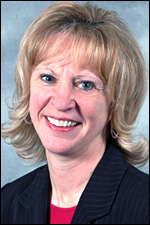 Carlson was also appointed to the board by Granholm in 2007. She retired from the post of president and chief executive officer of Blue Care Network of Michigan in 2010 after a 33-year career that included positions at both Blue Care Network and Blue Cross Blue Shield of Michigan. Prior to being appointed to the BCN leadership role in 2006, Carlson was vice president of the General Motors account and of several other key areas with "the Blues." A certified public accountant, she previously was a staff auditor with the accounting firm of Touche Ross & Co. as well as a private financial consultant.

Carlson earned her bachelor's degree in accounting from WMU in 1968 and her master's in business administration from Wayne State University in 1989. She was a member of the WMU Alumni Association Board of Directors from 1995 to 2001, serving as its president in 2000-01. She has been active in a number of professional and community organizations.

Other individuals elected to one-year terms as officers of the WMU Board of Trustees at the Feb. 29 meeting were: