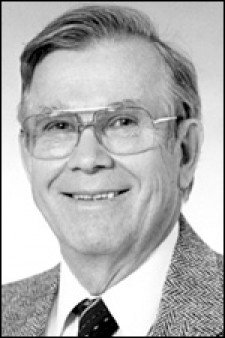 Niemi, professor emeritus of business information systems, joined the WMU faculty in 1955 and retired in 1985 after 30 years of service to the University in what is now the Haworth College of Business.

He started computer courses at WMU in 1955-56 and served as acting chair of the Department of Business Education and Administrative Services in 1977-78 and as chair from 1978 to the end of 1983.

While chair, he headed the department as it transitioned into the Department of Business Information Systems in February 1983. The transition reflected the increasing demand for computer programmers, systems analysts, and office management and systems specialists, as well as the need for business graduates with better communication skills.

Niemi also served as assistant to the dean of WMU's business school from 1963 to 1978. He was a board member and international director of the Data Processing Management Association from 1960 to 1963 and a member of several other professional organizations and national honor societies.

Prior to coming to WMU, Niemi taught part time at Ohio State University as well as taught business classes and coordinated co-op occupational training at Comstock (Mich.) High School. He was a U.S. Army veteran who was stationed at Fort Custer near Battle Creek, Mich., at the beginning of World War II.

In retirement, Niemi spent his winters at Harbor Isles in North Port, Fla. He earned a bachelor's and master's degree from WMU in 1952 and 1954, respectively, and a doctoral degree from Ohio State University in 1959.

A graveside ceremony with military honors will be held at 11 a.m. Friday, March 9, at Fort Custer National Cemetery, 15501 Dickman Road in Augusta, Mich.

Memorial donations may be made to Hospice Care of Southwest Michigan. Visit langelands.com to make a memorial guestbook entry.