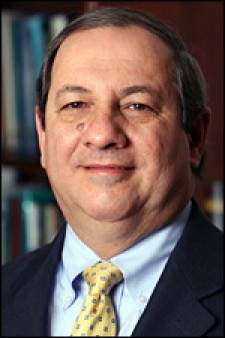 KALAMAZOO--An expert on governmental repression and human rights will address the citizen uprisings in Libya and Syria when he presents Western Michigan University's 2012 Samuel I. Clark Lecture.

George A. Lopez, with the University of Notre Dame's Kroc Institute for International Peace Studies, will speak on "Liberating Libya, Strangling Syria: Intervening for Human Rights and Protection" at 7 p.m. Wednesday, March 14. The event, which is free and open to the public, will take place in the Fetzer Center's Putney Auditorium on the main WMU campus.

Lopez holds the Rev. Theodore M. Hesburgh, C.S.C., Chair in Peace Studies at the Kroc Institute and has been recognized repeatedly as an outstanding teacher by Notre Dame. He also is an advisor to the U.N. Security Council, the European Union, and numerous governments, foundations and organizations involved in human rights, international affairs and peace research.

A prominent scholar and commentator, he studies the problems of state violence, especially economic sanctions, gross violations of human rights, and ethics and the use of force. His findings and perspectives on have been featured by news outlets such as the New York Times, Reuters, CNN, PBS and CBS News.

Working with David Cortright, Kroc Institute director of policy studies, Lopez has written five books and more than 25 articles and book chapters on economic sanctions. His research with Cortright detailing the unlikely presence of weapons of mass destruction in Iraq appeared before the Iraq War in Arms Control Today and was further articulated after the war in Foreign Affairs.

In much of that work, Lopez argues against reflexively resorting to military force. "The punish-and-destroy model is not the answer," he has stated. "Diplomatic strategies can and do work effectively, but they have been overshadowed by the constant drumbeat of war."

Lopez has served from October 2010 to July 2011 on the U.N. Panel of Experts for monitoring and implementing U.N. sanctions on North Korea. He also has served as a senior research associate at the Carnegie Council on Ethics and International Affairs, Jennings Randolph Fellow at the U.S. Institute of Peace, interim executive director and board chair for The Bulletin of the Atomic Scientists, and chair of a committee for the MacArthur Foundation's Program in Peace and International Cooperation.

WMU's Clark Lecture is an annual memorial event honoring the late Dr. Samuel Clark, WMU professor emeritus of political science and founding dean of the Lee Honors College at the University. This year's lecture is being co-sponsored by the Institute of Government and Politics and the Haenicke Institute for Global Education.