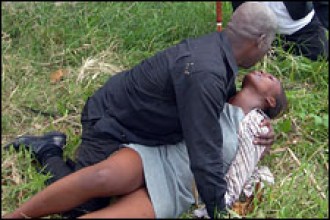 "The Loves of a Zombi"

KALAMAZOO--The screening of seven feature-length films from French-speaking countries across the globe and visits by two award-winning filmmakers from Morocco and Quebec are on tap as part of the 11th Annual Francophone Film Festival of Kalamazoo at Western Michigan University.

The festival runs Wednesday through Sunday, March 14-18, in the Little Theatre, where Moroccan filmmaker Daoud Aoulad-Syad will present his latest creation, "The Mosque," and Maxime Giroux will present his film, "Jo for Jonathan," along with the screenings of four other feature-length films from The Congo, Haiti, Belgium and Quebec.

Other long-feature films this year include "Kinshasa Symphony" by Claus Wischmann and Martin Baer, "The Loves of a Zombi" by Arnold Antonin, "Black Venus" by Abdellatif Kéchiche, "The Barons" by Nabil Ben Yadir and "Monsieur Lazhar" by Phillippe Falardeau. The festival also includes the screening of a host of short films.

Aoulad-Syad is one of the most promising directors in the emerging Moroccan cinema and has won many international awards, both for his previous films and for "The Mosque," which received the Best Script Award at the Francophone Film Festival of Namur in Belgium. In this film-within-a-film, Aoulad-Syad explores the unique remains of his previous film--a mosque left behind from a set-village erected next to a real one. The fake mosque became a real site of worship, creating problems for the landowner. "The Mosque" will be shown at 7 p.m. Saturday, March 17, and 4:30 p.m. Sunday, March 18.

Aoulad-Syad's visit to Kalamazoo is through the WMU Visiting Scholars and Artists Program and is cosponsored by the Department of Foreign Languages, Department of Comparative Religion, the Africana Studies Program, the School of Communication and the Haenicke Institute for Global Education.

Giroux, a Montreal native, has been steadily building a reputation as one of the leading directors in Canada. In 2006, his film "Les Jours" won the prize for best short film at the Toronto International Film Festival, while his film "Les Rouges al sol" won Best Live Action Short Drama honors at the 27th Genie Awards in 2007.

His latest creation is 2010's "Jo for Jonathan," which tells the story of Jo, who lives in the shadow of his older brother. Amidst a world of delinquency, they become interested in illegal car racing, but in one race, never reach the finish line. The film will be screened at 7 p.m. Friday, March 16, and 4:30 p.m. Saturday, March 17.