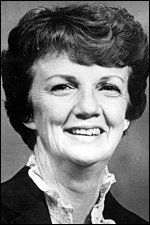 Fraser, of Northville, Mich., served on the WMU board from 1985 to 1992, leading the board as chair in 1991. Her tenure on the board was a period of great change for the University, and included a presidential search, launch of a campuswide research drive, a multi-million dollar construction initiative and successful conclusion of the largest fundraising campaign to date in the University's history.

Fraser, who earned bachelor's, master's and doctoral degrees in psychology from Wayne State University, served that university for 25 years as a researcher, faculty member and administrator, before retiring. After her 1984 retirement from WSU, she became a senior associate with Lutz Associates Inc., a human resources development consulting firm.

Always active in her community, Fraser's activities included membership in the Detroit Institute of Arts' Founder Society, the National Organization for Women, the American Association of University Women and the Coalition of Labor Union Women. She served on the boards of a number of organizations and was a past president of both the Women's Economic Club and the Mental Health Association of Michigan.

A celebration of Fraser's life is planned for late spring. Her family has requested that in lieu of flowers, contributions in her name can be made to the Mental Health Association of Michigan, the work of which was one of her lifelong passions.

Fraser's husband, Douglas A. Fraser, onetime president of the United Auto Workers and adjunct professor of labor relations at WSU, died in 2008. The two were donors to WMU, and the seminar rooms in the Lee Honors College are named for them.