Golden Globe nominee 'The Kid With a Bike' at Little Theatre 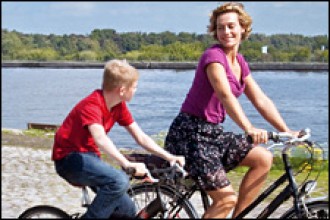 Winner of the Grand Jury Prize at the 2011 Cannes Film Festival and a Golden Globe nominee for Best Foreign Language Film, the new film by the Dardenne brothers delves into the emotional life of troubled 11-year-old Cyril (Thomas Doret). When his father (Jeremie Renier) abandons him, Cyril obsessively searches for his bicycle--placing his last bit of hope in this symbol of their relationship. Almost by accident, he becomes the ward of a kind hairdresser (Cecile de France), who seems surprised to find herself so determined to help him. With his wild, unpredictable behavior and his disastrous search for father figures, Cyril risks losing her. But, she will not give up without a fight.

Written and directed by Jean-Pierre and Luc Dardenne, "The Kid With a Bike" is rated PG-13 for thematic elements, violence, brief adult language and smoking. Released in May 2011, the film has a run time of 87 minutes and is shown in French with English subtitles.

For more information, visit kalfilmsociety.net, contact the Kalamazoo Film Society at kalfilmsociety@yahoo.com, or call the Little Theatre movie line at (269) 387-8221.