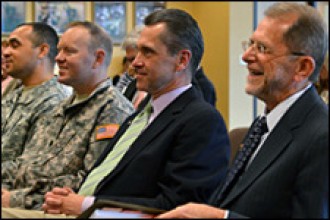 KALAMAZOO--Western Michigan University President John M. Dunn was honored May 31 for his and the University's long record of support for employees and students called to active duty by the National Guard or Reserve.

Dunn was recognized as a "patriotic employer" and for "contributing to national security" by supporting employee participation in the Guard and Reserve. The award from the Office of the U.S. Secretary of Defense was presented in Kalamazoo by two representatives of the department, retired U.S. Navy Capts. Rick Burn and Paul Ryan. Both are volunteers with Employer Support of the Guard and Reserve, and Ryan leads the Michigan ESGR committee.

Reserve Sgt. 1st Class Erik Conover nominated the University for the award. He is a WMU employee who has been deployed three times for a year or more--once each to Kosovo, Iraq and Afghanistan. He submitted the nomination late last summer, shortly after his last deployment with the 415th Civil Affairs Battalion working on provincial reconstruction in Afghanistan.

"Besides me, Western has supported other employees and students who have been called to military duty," Conover says. "The Western community has shown many times over that they care for those of us who have a second job serving our country."

He noted care packages sent to him overseas, colleagues who checked on his family regularly and an information technology department that welcomed him back to his pre-deployment job as a LAN specialist when his deployments ended.

In accepting the award, Dunn praised the sacrifices that members of the Guard and Reserve make in order to fulfill their duties, and acknowledged the campuswide effort to support those employees and students who serve.

"I know my name is on the award, but this is an honor intended for our entire campus," Dunn said. "It singles out both those who serve in the Guard and Reserve and those who step up to help support those serving and the families they've left behind."