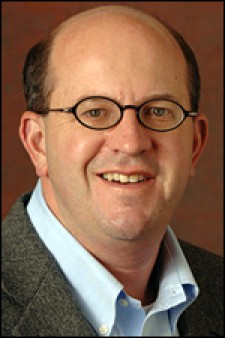 KALAMAZOO--A new book by a Western Michigan University professor shines new light on the 2008 financial crisis by scrutinizing the actions of the Federal Reserve, both before and after the worst economic downturn in American history since the Great Depression.

Dr. J. Kevin Corder, professor of political science, spent about two years writing his analysis, titled "The Fed and the Credit Crisis." The book, released in April by Lynne Rienner Publishers Inc. and available on Amazon.com, grew out of Corder's longtime research on the Fed.

"When the financial crisis happened, I thought it would be good time to revisit the Fed, how the crisis affected the Fed technically and politically, and how the Fed adapted after the crisis," Corder says.

Corder carefully reviewed information he'd gotten from several presidential libraries for a prior research project he conducted on the Fed about 25 years ago to get a sense of the institution's behavior over time in dealing with financial crises. That also gave him fresh insight into how the Fed had adapted to new functions and responsibilities.

The book maintains a focus on the 2008 crisis and its aftermath, but the history lessons gave Corder a greater understanding of how and why the Fed reacted the way it did.

"It was pretty clear and didn't take much digging to find out that the Fed really turned a blind eye to a lot of the practices in the home mortgage industry and in the business of banking that introduced a lot of risk into the financial sector," Corder says. "They grossly underestimated the vulnerability of banks to a decline in home prices and so the entire crisis unfolded as a surprise."

By 2008, those running the Fed had become advocates of deregulation on a variety of levels, Corder says. When problems arose, they were slow to respond through reregulation, leading to the Fed being branded at subsequent congressional hearings as being "asleep at the wheel."

For nearly 30 years, the Fed had pursued a doctrine of deregulation under the long tenure of its most vocal advocate, Alan Greenspan. The long-running policy resulted in huge growth in the size of financial services companies, multiple new lines of business and complex relationships that set up the crisis.

Meanwhile, several other factors were conspiring to bring down the U.S. financial system. Those included innovations in mortgage lending that expanded loans to risky borrowers; growth in "securitizing" of mortgages by investment banks by bundling loans into mortgage-backed securities; creation of new, highly complex types of securities, some based on the original mortgages, others constructed from derivatives, leaving banks and rating agencies clueless as to how to value them; and a shadow banking system, in which most of those practices were being carried out by banks in other countries, outside the purview of U.S. regulators.

The shadow banking system further exacerbated the problem, resulting in plummeting hedge and money market funds and the failure of stand-alone investment banks. All of that risk crept up on the Fed, as the risk from unregulated banks began to show up on the ledgers of investment banks like Bear Stearns and Lehman Bros. and then piled up on regulated banks.

"So there was a spillover from the shadow banking sector onto regular financial institutions," Corder says, "and that's when people began to pay attention and became alarmed."

Corder says similar crises had occurred before. In 1998, a very large hedge fund failed, prompting a big push for greater regulation of both hedge funds and financial derivatives. That effort failed because of an "internal orthodoxy" that deregulation produced less risk and greater stability in financial markets. Adhering to the deregulation-is-better mantra and having become a kind of advocate of big financial institutions, the Fed continued to ignore numerous alarm bells.

In addition to the Fed's handling of the financial crisis, Corder examines other developments, such as the growing politicization of the Fed and whether a similar disaster could occur again. It's unclear whether recently passed Dodd-Frank legislation and creation of the Consumer Financial Bureau and Financial Stability Oversight Council will be enough, with powerful banks fighting new rules every step of the way.

Unfortunately, it may take another crisis before regulation capable of preventing similar disasters is passed, such as rules limiting the size of financial services firms.

"We're back to this fight over regulation versus deregulation," Corder says, "and the proponents of deregulation in the financial services industry are winning."