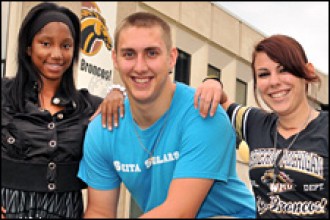 Known as the Seita Scholars program, WMU began providing a comprehensive support system in 2008 for individuals who have aged out of the foster care system, and who wish to earn a college degree. The program includes tuition support, year-round housing and around the clock counseling availability.

Chris Harris, Seita Scholars director, first became involved with the program as a career mentor. Harris says a total of 45 new mentors are needed to work with incoming students. According to Harris, the volunteer opportunity is rewarding for both the mentor and mentee.

"I chose to serve as a mentor because I thought I could assist students with opening their minds to new opportunities and in developing skills to manage their lives in a more fulfilling way," Harris says. "I think I was able to do that, but what I hadn't fully considered was that I and my family actually gained just as much, if not more, from the relationship that developed. My mentee helped me to be more engaged with my family as they have developed, and also led me to better appreciate many of the things that I might consider 'small,' but play such a large role in my own personal development."

Mentors help WMU former foster youth build networks of supportive individuals as they pursue college studies and subsequently transition into the workplace. The career mentoring service links Seita Scholars to professionals who agree to volunteer by engaging mentees in a variety of activities such as job shadowing, networking, information sharing, and discussion about career paths and plans.

The Seita Scholars program will match scholars with mentors based on career interest when possible. Otherwise, just having a responsible, caring adult to spend time with and learn from will be invaluable to both the scholar and the program.