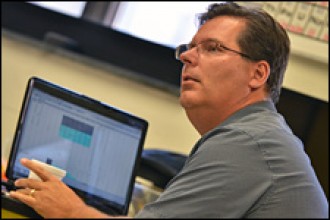 KALAMAZOO--An engineer who holds 55 patents and a professional pilot with experience as a veterinary medicine surgical nurse supervisor are among 13 highly skilled people pursuing a specially designed master's degree at Western Michigan University to prepare them for careers as science and math teachers in high-need public schools.

Each of the 13 has received one of the W.K. Kellogg Foundation's Woodrow Wilson Michigan Teaching Fellowships. This statewide initiative aims to improve student achievement by placing into secondary-school classrooms career changers or recent college graduates who are particularly talented in math, science or technology.

Michigan Gov. Rick Snyder unveiled the 2012 cohort at a press conference in Lansing today. This is the second year of the program in Michigan. WMU and five other state universities are each training a class of fellows. The students were selected for this competitive fellowship for their strong backgrounds in what are known as STEM disciplines--science, technology, engineering and mathematics.

"Great teachers and great teaching can make all the difference for our students, their educational growth, future success and quality of life," said Snyder in announcing the new fellows. "The W.K. Kellogg Foundation's Woodrow Wilson Michigan Teaching Fellowship is making tremendous strides toward the goal of providing children across Michigan access to highly effective educators in these critical subject areas, and I commend this work and look forward to its continued role and achievements."

Each participant receives a $30,000 fellowship to complete a cutting-edge master's degree program as preparation to teach in urban or rural schools. They commit to teaching for three years and will receive ongoing mentoring. Meanwhile, the participating universities agree to redesign their teacher education programs.

The Wilson fellowship program is offered in other states. The W.K. Kellogg Foundation launched this initiative in Michigan, providing $18 million in funding for it.

This year's fellowship competition attracted 102,000 inquiries and ultimately 2,017 applications. The selection process included screening at the Woodrow Wilson Foundation, a full-day interview led by STEM teachers and careful admissions review by the universities.

Fellows from WMU's inaugural class are just completing their first year of the program, which included a teacher internship, and are in the process of filing for certification.

The 2012 fellows at WMU, their hometown and their degree and professional activities are: