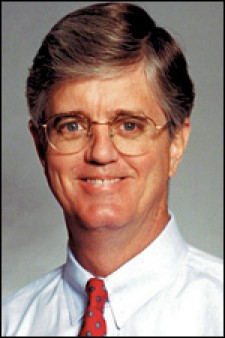 Dr. Richard G. Long, associate dean of the College of Health and Human Services and professor of blindness and low vision studies, will be presented the Lawrence E. Blaha Award at the upcoming biennial meeting of the Association for Education and Rehabilitation of the Blind and Visually Impaired July 21, in Seattle, Wash.

The award is presented by the Orientation and Mobility Division of professionals and is the highest honor that division bestows. It was initiated in 1968 to honor people who have made outstanding contributions to the profession of orientation and mobility and who are dedicated to serving people with visual impairments.

Blaha was a pioneer in the orientation and mobility field, who joined the WMU faculty in 1961. From 1964 until his death, he was director of the orientation and mobility program at California State College, Los Angeles. Other recipients of the Blaha award with connections to WMU, along with the year of their award, include Steve LaGrow (2006), Bill Wiener (1996), Everett Hill (1992), Don Blasch (1977) and Stan Suterko (1973).

A native of Knoxville, Tenn., Long received a master's degree in rehabilitation counseling in 1977 from the University of Tennessee, Knoxville, and a doctoral degree in special education from Vanderbilt University in 1985. Throughout his career, he has worked as a teacher, orientation and mobility specialist, counselor, program administrator and federal government researcher.

Long has been a faculty member at WMU since 1998. For the past 12 years, he has been the principal investigator of a large, multi-site research project supported by the National Eye Institute of the National Institutes of Health. The project focuses on intersection and roadway design in relation to the orientation and mobility of persons with blindness and low vision. Long has published many book chapters and articles in transportation engineering, human factors psychology and rehabilitation journals and recently co-authored a book on orientation and mobility techniques.