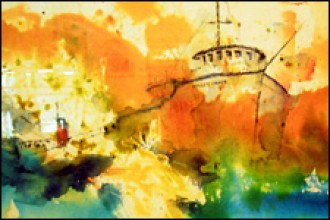 KALAMAZOO--Watercolors inspired by a Michigan artist's longtime passion for things nautical are sailing into Western Michigan University's College of Health and Human Services Building this summer.

An exhibit of Douglas Chambers' paintings, titled "Fresh Water," is on display through the end of August in the building's second floor art gallery. His paintings portray Michigan's waterways, landscapes, islands and bays--places he calls paradise.

"Capturing out-of-the-way areas in watercolors is a small way of distributing beauty to other people with the hope of renewing interest in Great Lakes clean water," Chambers says.

Chambers' enchantment with Michigan's waterways goes back to his early days as a deck hand on the state's Great Lakes. At age 14, he served on the crew of a 36-foot yawl out of Saugatuck, Mich. It was then that he learned to appreciate the art of sailing and the beauty and power of the Great Lakes that is reflected in his art.

Chambers earned a bachelor of fine arts degree from Kendall College of Art and Design. He worked as a cartoonist and illustrator for several northern Michigan newspapers and was the illustrator of Great Lakes Ships for a Saturday historical magazine, The Broadside.

He subsequently earned a bachelor of science degree in teaching and a master of arts in reading. He taught for more than 20 years with Benton Harbor Area Schools and was honored as Teacher of the Year in 1994.

Chambers has displayed his work at several juried shows in Michigan and has had three one-man shows. His paintings won the Best of Show award from the Beaver Island Watercolor Society in 2000, 2001 and 2007, and he won honorable mention from the Boniface Art Gallery in 2009. In May 2010, his show "Blue Ice and Fire" was held at the Alberta House in Sault Sainte Marie, Mich.