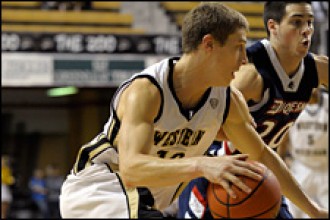 KALAMAZOO--The Western Michigan University men's basketball and women's tennis teams are among Division I teams nationwide being honored with Public Recognition Awards from the NCAA for posting Academic Progress Rates in the top 10 percent for their respective sports.

Each year, the NCAA tracks the classroom performance of student-athletes on every Division I team through the annual scorecard of academic achievement, known as the Academic Progress Rate--APR. The score measures eligibility and retention each semester or quarter and provides a clear picture of the academic culture in each sport. The most recent APRs are multi-year rates based on scores from the 2007-08, 2008-09, 2009-10 and 2010-11 academic years.

There are 954 different athletics programs that were publicly recognized this year, a grouping comprised of 560 women's teams and 394 men's or mixed squads. Top performing APRs this year ranged from 978 to a perfect 1,000, with the majority of teams earning a perfect APR. The number of teams in some sports may exceed 10 percent depending on the number of perfect scores.

Western Michigan is one of eight Mid-American Conference schools to be honored on the list, but joins just Kent State, Northern Illinois, Miami, and Akron as schools to have multiple programs recognized. The Bronco men's basketball team represents the only men's basketball team in the MAC to post an APR in the top 10 percent, while the Broncos' women's tennis program is one of four in the MAC to be recognized. Men's basketball features four athletes with grade-point averages at 3.59 or better, while women's tennis features seven athletes with a GPA greater than 3.0, four with a GPA greater than 3.5 and one athlete with a perfect 4.0 GPA.