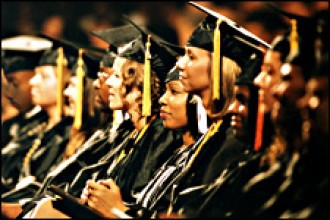 WMU President John M. Dunn will preside over the summer 2012 ceremonies. In all, the University will confer 1,498 degrees: 950 at the bachelor's level, 479 at the master's level and 69 at the doctoral level.

The June 2012 commencement ceremonies will feature music by Dr. Karl Schrock, University organist. The national anthem and the alma mater will be sung by WMU's chapter of the Phi Mu Alpha Sinfonia professional music fraternity, conducted by Keith Kelsey. The day's graduates will be welcomed as new alumni of the University by Jennifer L.B. Lentner, a member of the WMU Alumni Association Executive Committee.

Tickets are required for guests to attend commencement, and each participating student is eligible to reserve up to six guest tickets. After all ticketed guests have been seated in Miller, any remaining open seats will be offered to those without tickets. Guests without tickets may view the commencement ceremonies live on a large screen in Brown Hall, which is adjacent to Miller.

A live Webcast of the ceremonies will be available online to a limited number of people the day of graduation. Those planning to view the Webcast will need to install Windows Media Player on their computers.

The University's TotalTech store will be providing professional recordings of the ceremonies in DVD and VHS formats. The recordings will cost $25 each, plus shipping and formatting fees if any, and may be ordered by mail or calling (269) 387-3930.

In addition, a professional photographer will take pictures of each graduating student. Proofs will be sent to the students, but purchase of prints is optional.

Visit wmich.edu/commencement for complete graduation information, including how to view the live Webcast or obtain tickets, recordings and student photos.