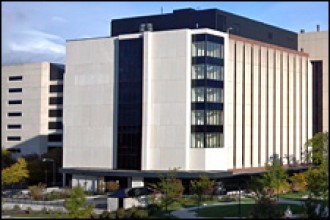 Future site of the WMU School of Medicine on the W.E. Upjohn Campus

KALAMAZOO—Dr. Hal B. Jenson, founding dean of the new Western Michigan University School of Medicine, announced today that the future home of the school, located in downtown Kalamazoo, will be named the W.E. Upjohn Campus in honor of the founder of The Upjohn Co.

In December 2011, William U. Parfet, chairman and CEO of MPI Research in Mattawan, Mich., announced the donation of a 330,000 square-foot building to the University for use by the new medical school. The building, located in downtown Kalamazoo, just off the northwest corner of Lovell and Portage streets and widely known as Building 267, was once part of the Upjohn, Pharmacia, and Pfizer downtown campuses.

Planning is under way to extensively renovate and slightly expand the facility to house the medical school. Renovation will begin later this summer and is scheduled to be completed by mid-2014, in time for the first class of medical students to enter the school in August 2014.

"In 1885, my great grandfather moved from Hastings to Kalamazoo to start The Upjohn Company," said Parfet, great grandson of W.E. Upjohn. "The first piece of land he purchased was located on Lovell Street. This property represents the beginning of the greatly expanded Upjohn campus, which included this building throughout the life of the company. I'm proud of that. It only makes sense to our family that this would be the headquarters for the WMU School of Medicine."

William Erastus Upjohn was an 1875 graduate of the University of Michigan Medical School and practiced medicine for 10 years in Hastings. In his home, Upjohn experimented with ways to improve the means of administering medicine, and received a patent for his invention of the easily digested friable pill. In 1886, he founded The Upjohn Pill and Granule Co. in Kalamazoo, which later became The Upjohn Co., manufacturer of friable pills. He served for 43 years as the company's president. Upjohn was known as Kalamazoo's "first citizen" because of his active role in the community.

According to Jenson, plans for the medical school development are moving forward as expected. Recently, the Liaison Committee on Medical Education granted the WMU School of Medicine "Candidate School" status. After submitting the required medical education database and planning self-study documents, which were favorably reviewed by the LCME, the medical school has received approval to host a site visit for preliminary accreditation.

The accreditation of medical education programs assures that they meet national standards of educational quality. The cyclical process of institutional self-study and assessment, coupled with external validation by a team of professional peers, provides a mechanism for ongoing quality improvement.

About the WMU School of Medicine

WMU's new School of Medicine is a partnership involving the University and Kalamazoo's two teaching hospitals, Borgess Health and Bronson Healthcare. Planning has occurred over the past four years; fundraising, accreditation work, and curriculum development for the school are well underway. Expecting to welcome its first class in fall 2014, the school is a privately funded initiative housed at WMU, which is one of the nation's 139 Carnegie-designated public research universities and one of only five such universities in Michigan. In March 2011, WMU announced a foundational gift of $100 million for the medical school from anonymous donors.