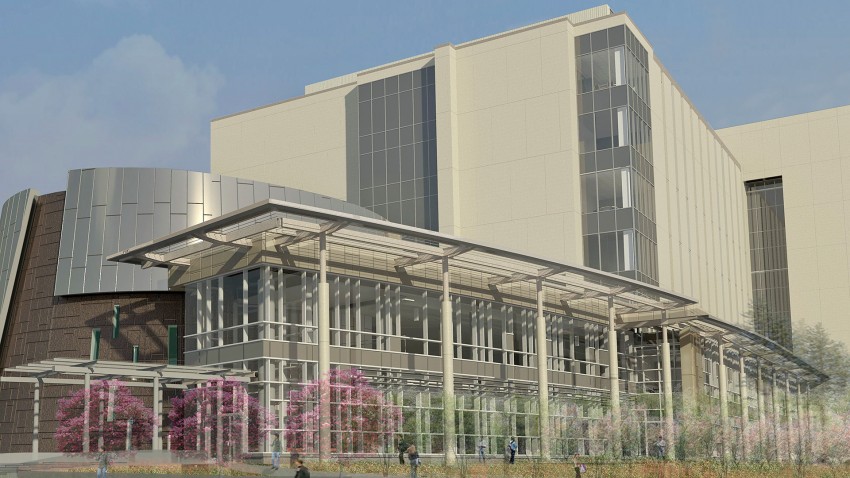 KALAMAZOO—The new Western Michigan University School of Medicine has been granted preliminary accreditation by the Liaison Committee on Medical Education, the national accrediting body for educational programs leading to the Doctor of Medicine—M.D.—degree.

Announcement of the accreditation was made Oct. 12 by Dr. Hal B. Jenson, founding dean of the new medical school, during a ceremonial groundbreaking for renovation and expansion of a downtown Kalamazoo building that will house the school.

"This is an important step because we now have the go-ahead to recruit students for our first class to begin in August 2014," said Jenson. He thanked the visionary leaders from WMU and Kalamazoo's two teaching hospitals, Borgess Health and Bronson Healthcare, who have collaborated to develop the medical school.

"The Kalamazoo community has a 40-year legacy of collaboration providing outstanding undergraduate and graduate medical education," Jenson said. "The Liaison Committee on Medical Education noted this as a major strength of the new medical school."

One simple but powerful word was repeated during Friday's groundbreaking ceremony: community. A crowd representing area physicians, community leaders, local residents, premedical students from the WMU Chapter of the American Medical Student Association and employees from the medical school gathered under a tent at the site of the School of Medicine's 350,000-square-foot educational facility to watch the ceremonial shovels break ground on the community initiative.

Speakers including U.S. Rep. Fred Upton and WMU President John M. Dunn, explained what the school—scheduled to open in fall 2014—will mean not only to the area's economy, but to health care in Michigan and the southwest Michigan community.

"The city of Kalamazoo has a history of excellence in education, health care, research and life-science exploration—all of which are assets for the development of a new medical school," Dunn said. "Efforts to launch a medical school address the growing shortage of physicians in Michigan and the nation, and provide other benefits to the local area.

"A new medical school will contribute to meeting the national and local need for physicians and also bring benefits to the state of Michigan and Kalamazoo community. New jobs generate personal income for local residents. Businesses in the wholesale, retail, service and manufacturing sectors benefit from the direct expenditures of the medical school on goods and services. In addition, businesses are recipients of spending by staff, medical students and visitors. And, the $68 million investment to renovate and expand this building in downtown Kalamazoo will mean the School of Medicine will have an immediate impact on the community as well."

About the W.E. Upjohn Campus

In December 2011, William U. Parfet, chairman and CEO of MPI Research in Mattawan, Mich., donated an existing 320,000-square-foot building to WMU to be used by the new medical school. During the groundbreaking to renovate that building, the school's founding dean, Jenson, talked about the history and future of medical education in southwest Michigan.

"This seven-story building is located on the W.E. Upjohn Campus of the School of Medicine. The campus is named after William Erastus Upjohn, William Parfet's great grandfather, who moved from Hastings, Mich., to Kalamazoo to start the Upjohn Co. in 1885. This property was the first piece of land he purchased, and we are fortunate and privileged to have this site as the home of the new medical school," Jenson said. "This facility will be home to a pioneering class of students, faculty and staff and remain relevant to the future generations that will follow in their footsteps. Its design and execution have been guided by four defining principles from the School of Medicine vision: learner centered, discovery driven, globally engaged, and patient and family focused."

The new medical school, Jenson noted, will admit an inaugural class of about 50 students, eventually increasing this number to about 80 students each year. These students will receive instruction from School of Medicine physician faculty and residents, as well as community physicians. Medical students will be exposed to a wide range of patient-care environments at the WMU School of Medicine Clinics and area physician offices, and at Borgess Medical Center and Bronson Methodist Hospital.

"This will be a day long remembered," Dr. Jenson told the crowd. "Each of you can look back and say that you were at Western Michigan University's School of Medicine the day they broke ground on the new medical school and celebrated the accreditation of the medical school."

The new WMU School of Medicine is a collaboration involving the University and Kalamazoo's two teaching hospitals, Borgess Health and Bronson Healthcare. It has been in planning since 2008 and was granted preliminary accreditation from the Liaison Committee on Medical Education in October 2012. Expected to welcome its first class in fall 2014, the school is a private 501(c)(3) nonprofit corporation supported by private gifts, clinical revenue, research activity, tuition from students and endowment income. In March 2011, the University received a gift of $100 million for the medical school from anonymous donors.