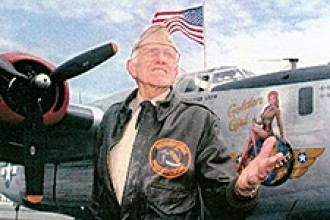 Zamperini is featured in Pulitzer-Prize-winning author Laura Hillenbrand's latest book, "Unbroken: Louis Zamperini's Story of Survival, Resilience and Redemption." He will speak at a free event at 6 p.m. in the Bernhard Center's North Ballroom. Free tickets are available now by contacting the Lee Honors College at (269) 387-3230. Any tickets still available the day of the event will be distributed after 5:30 p.m. at the door.

A world-class runner in the 1936 Olympic Games in Berlin, Zamperini joined the U.S. Air Corps as a bombardier in the South Pacific during World War II. On a routine reconnaissance run, his aircraft crashed into the Pacific Ocean, and he and another crewmember survived on a life raft for 47 days, drifting 2,000 miles into Japanese controlled waters. He was captured by the Japanese and put into a series of prison camps.

After the war, he returned to Torrance, Calif., a hero. But it was his Christian faith that helped him move to the next phase of his life.

Despite the psychological and physical torture Zamperini endured during his time in Japanese POW camps, he returned to Japan as a missionary to preach forgiveness to the very guards who had tormented him during the war. Years later, he was invited to carry the 1998 Olympic flame just outside of the place where he had been held captive in Nagano, Japan.

Today, at 95 years old, he travels around the world, speaking on how to deal with stress, the meaning of Olympism and the importance of his faith.