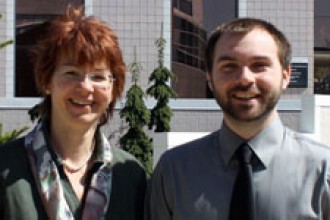 KALAMAZOO—A Western Michigan University doctoral student is the second in WMU history and the first in chemistry to be awarded a coveted National Science Foundation Graduate Research Fellowship.

David Sellers is the first WMU chemistry student to win the award, which, starting this fall, will pay $42,000 a year for three years to further his research. Sellers joined the Department of Chemistry in 2011 to start his doctoral degree in the area of synthetic organic and supramolecular chemistry, working in the research lab of Dr. Elke Schoffers, WMU professor of chemistry.

The award puts Sellers among an elite group of chemistry graduate students. Out of some 2,000 applications submitted, 153 were awarded in chemistry, of which five went to graduate students at Michigan universities. In addition to Sellers at WMU, four went to students at the University of Michigan. Other institutions awarded fellowships include such recognizable universities as Caltech, Columbia, Harvard, Northwestern, Princeton, MIT, Stanford, Berkeley and Yale.

The award dates back to 1952. Since then, the NSF has funded more than 46,500 fellowships out of more than 500,000 applicants. More than 30 have gone on to become Nobel laureates. The first fellowship to a WMU graduate student was awarded in 1969 to psychology student Michael Domjan.

Sellers graduated from Ogemaw Heights High School in West Branch, Mich., in 2005. He completed an honors thesis with Dr. Bruce Baldwin at Spring Arbor University and earned his bachelor's degree in 2009. After graduation, Sellers volunteered with Resource Development International-Cambodia for five months and then became an adjunct faculty member at Spring Arbor before joining the graduate program in the WMU Department of Chemistry.

Sellers, who is married and has a seven-month-old child at home, was excited and, to a certain extent, relieved to win the fellowship. The $42,000 annual grant pays $12,000 for educational expenses and a $30,000 stipend.

"It was great to be singled out for this honor," he says, "but it's also reduced a lot of the stress level."

Sellers' research is focused on building molecules that act as sensors that could detect the release of nerve gas agents. Ultimately, his research could be used to help emergency responders in the event of a terrorist attack or chemical warfare or as a catalyst for certain organic reactions.

Sellers has been interested in science from a very early age. In high school, he had an exceptional chemistry teacher, whose passion for the subject rubbed off on Sellers. He also credits the chemistry department at WMU with furthering his interest and is particularly thankful to Schoffers and Dr. Sherine Obare, associate professor of chemistry, for helping him hone his research ideas. For Sellers, chemistry stands out among the sciences.

"It's a very exciting field, partly because it's at the meeting point of almost all of the scientific disciplines," he says. "So it's an exciting field to be in, and I really like that interplay, especially between biology and chemistry."

Sellers would like to stay in the area after earning his doctoral degree and possibly become a teacher and researcher at a university.

"I'm very thankful for this and am very grateful," he says. "Not everyone is able to get one of these."