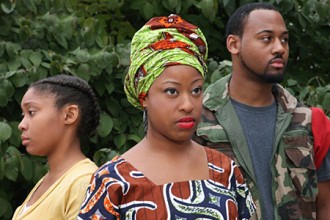 "Ruined" has been praised by the Chicago Tribune as “a remarkable theatrical accomplishment.” The play, set in present-day Congo, is a captivating story following a woman’s controversial and courageous journey to profit from and protect the women whose bodies have become battlegrounds in a devastating civil war. Starring Marissa Harrington (Mama Nadi) and Tia Pinson (Sophie), "Ruined" contains mature themes, sexual situations and strong language.

A panel discussion, titled "Theater for Social Change: The War on Women at Home and Abroad," will be held following the Nov. 9 performance, featuring Martha Huckabee, executive director of Great Lakes PeaceJam; Jaime Grant, executive director of Kalamazoo College’s Arcus Center for Social Justice Leadership; Suhashni Datta-Sandhu, WMU associate professor of political science; and guest director Awoye Timpo. The discussion is sponsored by the Department of Gender and Women's studies as well as the Department of Theatre.

Timpo is a New York based director and producer, whose directorial credits include "The Vanished,"  by Olivier Coyette, "Rhinoceros," by Eugene Ionesco and "Shakespeare’s Sonnets on Tap." She has worked as an assistant director on plays by writers including Caryl Churchill, Athol Fugard and Tarell Alvin McCraney, and directors including Jo Bonney, Stephen Adly Guirgus and James Macdonald. Timpo earned a bachelor's degree in theatre, French and Spanish from Ohio Wesleyan University and a master's degree in contemporary French studies from the University of London.

All seating for "Ruined" at Williams Theatre is general admission. Tickets are $20, $18 for senior citizens and WMU employees, $5 for WMU students and $10 for all other students. They are available by calling (269) 387-6222, online at wmutheatre.com, or by visiting the Gilmore Theatre Complex or Miller Auditorium ticket offices. Group discounts are available by calling (269) 387-3227.