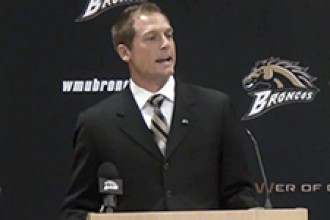 P.J. Fleck, who served as receivers coach for the Tampa Bay Buccaneers this season, was named the 15th coach in the 107-year history of Bronco football. WMU Athletic Director Kathy Beauregard said Fleck was the clear choice to be at the helm.

"It was very important our new coach met the needs of our returning football student-athletes, and after meeting with them, it was clear P.J.'s pedigree as a player and coach at the highest levels of football made for what we feel will be a championship combination at WMU," Beauregard said.

"We wanted a coach that would bring limitless energy, passion, enthusiasm and opportunity to our football program both on and off the field, and we know that Coach Fleck is that person. He stresses discipline and accountability in a positive and consistent manner and is someone who has been a winner at every level of his career."

Fleck, a receiver, played at Northern Illinois University from 1999 to 2003. In the NIU record books, he ranks third in career receptions with 179 and fourth in career receiving yards with 2,162. In addition, he made 77 receptions, the second most receptions in a season; led in receiving yards in both 2001 and 2003; owns the school record for punt returns with 87; and ranks second in punt return yards in a career with 716.

Fleck went on to sign with the NFL's San Francisco 49ers as a free agent in 2004, spending most of that season on the practice squad, and was placed on the injured reserve roster in 2005.

The following year, he began his coaching career by serving as a graduate assistant at The Ohio State University. He returned to NIU in 2007 as wide receivers coach and took on the added duties of recruiting coordinator there in 2009.

Fleck spent the next two seasons as the wide receivers coach at Rutgers University under Greg Schiano, then followed Schiano to Tampa Bay earlier this year as the Buccaneers receivers coach.

"It's great to be back in the MAC. I am truly honored and humbled to be the 15th head coach of the Western Michigan University football program," Fleck said during the Dec. 18 news conference fomally announcing his selection.

"I would like to thank Kathy Beauregard, [WMU President] Dr. John Dunn and everyone involved in this process for believing in me, and my vision for WMU football. My staff and I will make it our mission to bring excitement, energy and a winning tradition back to the Broncos. We will recruit, coach and develop young men of character the Bronco way. I can't wait to get started on this journey. Go Broncos."