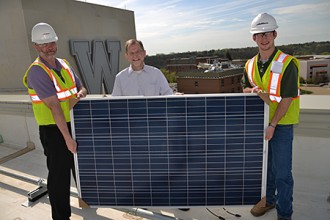 President Dunn poses with construction officials as they install solar panels on the roof of Sangren Hall.

KALAMAZOO—Western Michigan University has been named a 2013 Michigan Green Leader by the Detroit Free Press.

WMU was named the winner in the public sector category in this year's statewide competition. The names of the paper's eight 2013 honorees were announced May 5 in a column by business writer John Gallagher. This year's winners will be honored Monday, June 10, during a Detroit Economic Club event.

WMU was lauded for what the Free Press called "a remarkable range of green activities," that include the campus' extensive electric vehicle infrastructure, its recycling program and a partnership that allows all students, faculty and staff to ride Kalamazoo public transit for free.
Among other honorees for 2013 are the Detroit Riverfront Conservancy, DTE Energy and companies ranging from small- and medium-sized firms to an innovative automotive supplier.

The Free Press announcement notes the broad impact of this year's winners, quoting one of the judges as saying, "Nominees seemed to have an impact on society beyond their own backyards. I think the thing I saw this year, especially among those who won, was what I call a real depth of system impact.”