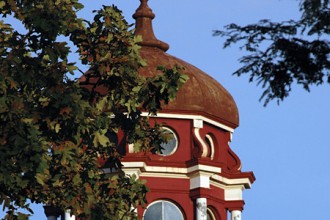 Key architectural features like the cupola shown here will be preserved during the East Hall renovation.

KALAMAZOO—After four weeks of evaluation and initial design work, campus officials and the Kalamazoo architectural engineering firm TowerPinkster unveiled some initial design concepts for East Hall renovation during the July 18 meeting of the Western Michigan University Board of Trustees.

The design process, which is still in its infancy, has been structured to involve input from the campus community and the general public, but some basic parameters of the visioning process were outlined along with preliminary sketches in the presentation to trustees. Regardless of the final design selected, it will include:

The beginning design elements shown at the board meeting focused solely on the 34,000-square-foot core of the building—the part of East Hall that was completed in 1905 and is considered the birthplace of WMU. Discussions remain underway to assess the cost and feasibility of preserving the wings of the building that were constructed later. Design parameters for the work also include a focus on enhanced green space for the Prospect Hill site.

"We've spent a great deal of time evaluating all of the buildings, analyzing the site, and assessing all of the materials that can come into play," TowerPinkster Principal Bjorn Green said in the presentation to trustees. "Our firm is truly excited about the potential for the space that we've been asked to design. We're working with our historic preservation consultant to both redevelop East Hall and design a hilltop space that will celebrate and honor the legacy of the entire site."

Next steps in the design process include:

• A late September public session to get input from WMU faculty, staff, alumni and students as well as the general public.

• A public session in late February or March to present the final design.

Tower Pinkster was identified as the project architect in early June. Since that announcement members of the firm's team and their historic preservation expert Gene Hopkins from Hopkins Burns Design Studio of Ann Arbor, Mich., have been gathering information and carefully identifying salvageable items from the four East Campus buildings at the top of Prospect Hill that can be used in the East Hall renovation or other historic preservation work.

The design parameters were unveiled as the campus prepared to move forward with razing the other structures on Prospect Hill. The area around West Hall and the Speech and Hearing Building was fenced off as a construction site earlier this week in preparation for weeks of hazardous material abatement and salvaging architectural elements that can be used elsewhere. Contracts for the work were signed July 8 with Midland, Mich.-based Bierlein Companies Inc., and notice of intent has been filed with the Department of Environmental Quality. Demolition of those two buildings will begin in three to four weeks and will be completed by late summer, as previously announced.

The remaining site preparation will occur in mid-fall, after the WMU Archives and Regional History Collections are moved to the new Zhang Legacy Collections Center just blocks away. The historical materials are now housed in East Hall and in parts of North Hall.

In June, the WMU Board of Trustees approved a $15 million bond issue—to finance renovation of East Hall. Meanwhile, campus development officials have spent the past seven months raising private gifts to leverage the impact of that $15 million.

"We see this as an opportunity to once again make the top of Prospect Hill a vibrant part of daily life at WMU and an important asset for the community at large," Business and Finance Vice President Jan Van Der Kley told the board during the presentation. "We expect the next two years to bring new construction jobs into the community and, at the end of the process, there will be an important new resource that can be broadly used for campus and community priorities."