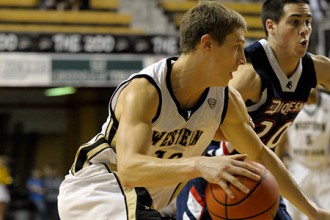 KALAMAZOO—Bronco student-athletes have once again been singled out for their winning record in the classroom.

Western Michigan University is the only school in the Mid-American Conference to earn one of the National Association of Basketball Coaches' inaugural Team Academic Excellence Awards, an honor reserved for those teams that maintain a collective grade-point average of 3.0 or higher over the course of the season.

The announcement came just one day after recent WMU graduate Brandon Pokley was named to the NABC Honors Court for the second-straight season. A former WMU basketball player who graduated in May with a degree in finance, Pokley maintained a cumulative 3.8 GPA while he was a student-athlete at WMU. He stepped into a full-time starting position in 2012-13, starting all 35 games for the Broncos in a season that posted 22 wins—the third-highest in program history.

Nine members of WMU's 2012-13 men's basketball team maintained a cumulative GPA of 3.2 or better throughout their academic careers. Eight earned a GPA better than 3.0 during the spring semester, while 12 posted a 3.0 or higher in the fall.

To earn an NABC Team Academic Excellence Award, an institution must count the GPAs of all men's basketball student-athletes competing during the 2012-13 season. Eligible schools include those in the National Collegiate Athletic Association Divisions I, II and III, as well as the National Association of Intercollegiate Athletics Divisions I and II.

To be considered for the NABC Honors Court, a student-athlete must be academically a junior or senior when nominated, maintain a cumulative GPA of better than 3.2 at the end of the 2012-13 academic year, and have matriculated at least one year at their current institution.