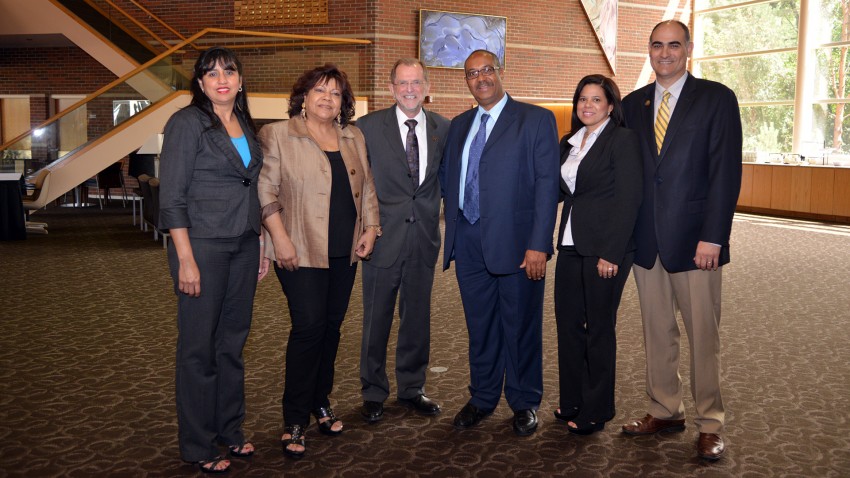 KALAMAZOO—During a weeklong trip to Western Michigan University, educators from the Dominican Republic's first community college are touring the campus and renewing acquaintances with WMU faculty members who visited their campus to offer a workshop earlier this summer.

The four members of the DR delegation are academic leaders at the Instituto Communitario De Educacion Superior, known as ITSC. The group includes the college's chief academic officer and three faculty leaders. They are:

They arrived July 21 and have been meeting both as a group and individually in their respective disciplines with WMU faculty counterparts. Their meetings have included time with three WMU faculty members who accompanied WMU President John M. Dunn to the DR in June to offer a five-day workshop at ITSC covering topics of interest across the higher ed spectrum, such as teaching styles, student interaction and issues of ethics,

"We truly took advantage of that course and are already seeing results from what was learned," said Marcia Corporan during a July 22 luncheon that reunited the WMU faculty instructors with the visitors. "We're a new institute with a new model. We're eager to have this kind of support and to continue to strengthen such ties."

Dunn and WMU's Director of International Admissions and Services Juan Tavares were in the DR in January for the grand opening of ITSC and returned in June to witness the progress that has been made. The new community college now has an enrollment of 1,800.

In addition to visiting academic departments at WMU, the four DR visitors are examining how student services and academic support are provided at the University by visiting such units as the Office of Career Services, the Writing Center and Sindecuse Heath and Counseling Center. The delegation also visited Kalamazoo Valley Community College to learn more about two-year colleges in the United States.

Since 2008 WMU has been a preferred U.S. location for DR college students through an agreement with the DR government. A total of 137 international students from that nation have earned WMU degrees. WMU will welcome an incoming class of 34 DR students this fall.