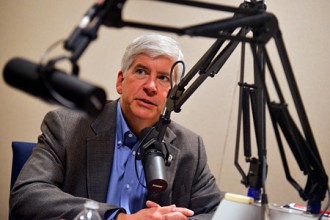 In extensive remarks about Detroit, Snyder alluded to 60 years when "the tough decisions weren't made" by city government. That city government, he said, had become an obstacle counteracting all the positive things that are going on in Detroit.

"Enough is enough," he maintained.

Late in the interview, talk turned to politics and whether Snyder had decided to run again for the gubernatorial post and how he felt about the prospect of pushback from Michigan Tea Party sympathizers.