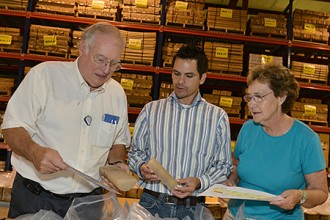 The Harrisons with Theodore Pagano (center)

KALAMAZOO—Rediscovery of a long-forgotten mineral deposit located under two West Michigan counties is set to spark a new multibillion industry in Michigan that will quickly position the state as the nation's leading source for a critical agricultural tool that is in demand internationally.

Potash—potassium chloride—is an essential plant nutrient and critical ingredient in fertilizer. Currently mined in only three locations in the nation, supplies are dwindling and prices skyrocketing. Now, one of the highest-quality potash ore deposits in the world has been identified below the surface of West Michigan.

The discovery was made by using the treasure trove of geologic data that is housed at Western Michigan University's Michigan Geological Repository for Research and Education. The result of the rediscovery, say geologists, will be the introduction of a new industry in Michigan worth as much as $65 billion, easily surpassing the state's historical oil and gas production revenues and triggering explosive job growth in Osceola and Mecosta counties.

"This is conceivably one of Michigan's most valuable resources," says Theodore A. Pagano, a potash geologist, engineer and general manager of Michigan Potash Co. LLC. That firm now controls the rediscovered potassium ore reserve called the Borgen Bed that lies under more than 14,500 acres in the two counties. His company has worked quietly over the past three years to ensure the reserve could be technically, economically and logistically put into production and compete head to head with the New Mexico and western Canadian mines that are now the major North American sources of potash.

"This is the United States' only shovel-ready potash project," Pagano says. "Michigan is New Mexico untapped. What we're looking at is the introduction of an industry that is critical to the economic health of the state. We'll be producing a Michigan product for Michigan farmers that would dramatically reduce the expensive transport costs on the more than 300,000 tons of potash consumed in our state annually.

Verification of the quality and amount of the potash in the Borgen Bed was done by using core samples provided by WMU geologists under the direction of Dr. William B. Harrison III, professor emeritus of geosciences and director of his department's Geological Repository for Research and Education.

In 2008, Harrison and his wife, Linda, an administrator with the repository, came into possession of geologic core samples collected in the early 1980s when a Canadian company was prospecting for potash in Michigan. That company established a mine and small processing plant in Michigan but pulled back from fully commercializing the deposit. Over the years, changing business plans and corporate mergers pushed the Michigan operation into the background, and mineral leases for the area lapsed. The sample cores came to WMU by chance and were added into the University's statewide collection of such core samples.

"Without Bill and Linda Harrison, Michigan and the United States would be without the rediscovery of a multi-billion dollar potash deposit," says Pagano who learned through industry sources that the Harrisons might be able to help him in his quest to define the scope and quality of the Borgen Bed. 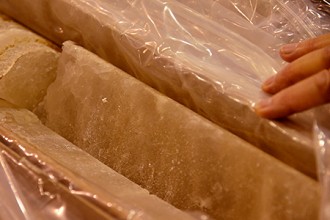 A potash sample, housed in WMU's Geological Repository for Research and Education

Potash is found in just a few areas once covered by inland seas. The seas evaporated and the potassium and sodium chloride deposits crystallized into potash ore and were covered by successive layers of rock and soil.

The Michigan deposit, WMU's Harrison says, is the purest and highest-grade potash being produced globally—600 percent higher than that being produced in New Mexico's vast Permian Basin. It is also twice the grade of deposits found in Canada and Russia, the two nations that control more than 80 percent of the world's potash reserve.

"One of the things that makes this so valuable is that it is an incredibly rich deposit that is in easy reach of the enormous demand from Midwest corn and soybean farmers who operate within a 500-mile radius of this deposit." Harrison says. "This is an opportunity for new wealth to come from the use of natural resources never tapped before."

Pagano has been working with investors and state and national officials to move forward with the capital-intensive establishment of manufacturing and processing facilities. He estimates an initial demand for more than 300 workers employed in an enterprise that will produce more than a million tons of potash annually.

Bringing Michigan potash to market, Pagano says, will provide a domestic source of the element at reduced cost to Midwest farmers as well as to the national agriculture industry. It will reduce imports, improve the nation's trade balance, create jobs and increase the state's tax base.

"It's our responsibility to develop this wisely and in a way that moves Michigan forward," Pagano says.

WMU has been home since 1982 to an extensive set of one-of-a-kind core samples and well records that have made the University the preeminent source for data on Michigan's subsurface geologic layers. WMU's Michigan Geological Repository for Research and Education makes information about those layers available by maintaining extensive online databases and housing the most comprehensive archive of Michigan geological samples and data. That archive includes more than 500,000 feet of rock cores from oil, gas, water and environmental research wells and from glacial research and Lake Michigan bluff erosion studies. It also contains impressive collections of geologic maps, and thousands of drillers' reports, electrical and mechanical logs, mudlogs, porosity and permeability analyses, and related well data.

In 2011, the state of Michigan tapped WMU to serve as home to the Michigan Geological Survey. The move made WMU Michigan's designated geoscience agency and put responsibility for mapping and assessing the state's geological resources—such as minerals, soils and groundwater—in the hands of the University's Department of Geosciences, which was already a storehouse of information concerning the state's groundwater, mineral and oil and gas resources.

For more information about the initiative, contact Pagano at tpagano@mipotash.com.

For information about WMU's geologic data resources or details on the science behind potash formation, contact the Harrisons at (269) 387-8642.