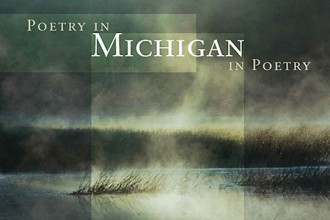 Cover of the anthology

KALAMAZOO—A series of four readings across Michigan will mark the publication of a new anthology featuring the work of 90 Michigan poets, including a former U.S. Poet Laureate, and 48 works of art by Michigan artists.

The book, titled "Poetry in Michigan/Michigan in Poetry," is being released by Western Michigan University's New Issues Poetry and Prose. A book launch event and reading is set for 2 p.m. Sunday, Oct. 20, at Bell's Eccentric Café, 355 E. Kalamazoo Ave. in Kalamazoo. Subsequent readings will be held in Portage, Lansing and Ann Arbor, with additional readings in the works in Traverse City and Detroit. All of the readings will feature an assortment of poets whose work is included.

The book was coedited by Dr. William Olsen, a WMU professor of English, and Dr. Jack Ridl, professor emeritus of English at Hope College. Poems by both Olsen and Ridl are included in the anthology, which has won high praise from others in the poetry world.

"William Olsen and Jack Ridl have put together a wonderful selection here that reflects the voices and landscapes of one of the most distinct of the 50 states," writes Jim Daniels, a Detroit native, award-winning poet and longtime professor in the creative writing program at Carnegie Mellon University. "This book will make you fall in love with Michigan all over again, or for the first time."

Poets include Philip Levine, the former U.S. Poet Laureate, Jim Harrison, author of "Legends of the Fall," and Thomas Lynch, whose books of essays inspired the television show "Six Feet Under."

Other critically acclaimed poets include Toi Derricotte, founder of Cave Canem, Linda Gregerson, francine j. harris and Laura Kasischke. In all, eight WMU faculty members contributed, including Professor of English Emeritus Stuart Dybek and deceased poets Herb Scott and John Woods. A number of the contributors received their master's or doctoral degrees from WMU and have gone on to have books published.

The handsomely assembled and illustrated book was designed by Paul Sizer of WMU's Frostic School of Art and is intended to be a celebratory anthology that "assembles a geography of verse out of Michigan's ongoing literary riches." What resulted is an intriguing range of poems providing an imaginative and all-encompassing view of Michigan's varied landscapes, from inland shorelines to cities, towns and countryside, the lives lived there, and the uncommon diversity of cultures residing in the Great Lakes State.

The dates of subsequent readings, the poets featured and their times and locations are:

Copies are available for purchase at wmich.edu/newissues, amazon.com, at any of the readings or at Bell's.