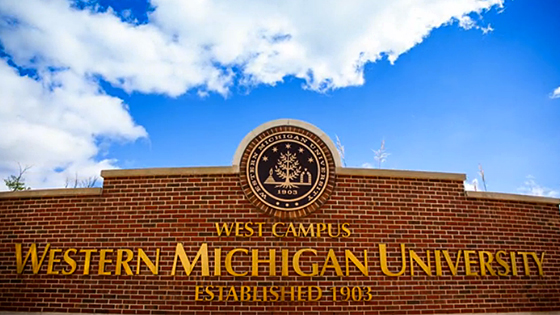 Online votes may be cast once per day through Tuesday, April 15.

KALAMAZOO—Western Michigan University is a finalist to win a 2014 Climate Leadership Award as part of an annual competition among the U.S. colleges and universities that are signatories of the American College and University Presidents' Climate Commitment.

WMU is one of four schools in its category for national honors in the awards program sponsored by Second Nature, a national nonprofit that seeks to create a sustainable society by transforming higher education, and Planet Forward, a web-to-television initiative that documents and shares energy, climate and sustainability advances that can be used to tackle some of society's biggest challenges.

"This is enormously gratifying," says WMU President John M. Dunn. "We've been committed to sustainability for a very long time, and we have a record of significant accomplishments. This honor is an acknowledgement of our past work, our current initiatives and our commitment to the future. It's about the culture of sustainability we're building on campus and in our community."

This year, the award program's fifth, drew the largest and most competitive pool of nominations to date, according to Second Nature. The other three schools in the running for top honors among doctorate-granting institutions are the University of Massachusetts-Amherst, University of North Texas and Ohio State University. The Second Nature Board of Directors will choose the award winner in WMU's category as well as the winners in four other collegiate categories that are based on higher education Carnegie classifications. Winners will be announced in late spring.

The Climate Leadership Award program features a public, online voting component. Each of the 20 finalists was invited to produce a video that promotes its specific sustainability efforts. Voting opens Tuesday, April 1, with the videos available for viewing and voting on the Planet Forward website at planetforward.org/content/climate-leadership-awards-2014 and continuing for the first two weeks of April, which is Earth Month. People can vote once daily between April 1-15. Approximately 50,000 votes were cast during last year's voting.

The WMU video highlights both the University's long-time strengths in energy savings as well as its commitment to building a culture of sustainability by weaving the institution's commitment to green and sustainable practices into every part of University life. Featured in the video are a number of scenes highlighting campus initiatives as well as interviews with Dunn; Dr. Harold Glasser, executive director for campus sustainability; graduate student Kate Binder; and undergraduate student Carlos Daniels.

The video describes WMU sustainability efforts that date back more than 30 years, predating those of many other schools that have more recently embraced the need for both basic green tenets and the need for systemic change.

"The impacts of climate change are being felt at all scales and among all people across the U.S. and the world, and our colleges and universities are clearly at the forefront of identifying solutions, and providing the next generation of responsible and pioneering leaders," says David Hales, president of Second Nature and a recent visitor to the WMU campus. "This year we are seeing the most innovative and exciting projects yet, and we are thrilled to be able to recognize these institutions and their work."

Second Nature works to create a healthy, just and sustainable society beginning with the transformation of higher education. Second Nature is the supporting organization of the American College and University Presidents' Climate Commitment, a partnership among approximately 680 colleges and universities in every state and the District of Columbia who have committed to reduce greenhouse gas emissions and prepare students through research and education to solve the challenge of the 21st century. Learn more at secondnature.org and presidentsclimatecommitment.org.

Western Michigan University's sustainability efforts, which are part of its strategic plan, date back to 1971 when the University established Michigan's first environmental studies program. In 1980, WMU launched a quasi-green revolving fund—the first in the nation—that is used to fund energy-saving projects. Energy savings from those efforts have been captured and reinvested in additional energy-saving initiatives over the years. A number of other higher education institutions have since adopted similar funding mechanisms. Additional work at WMU has focused on solar power, electric vehicles, food and gardening storm water management and interdisciplinary efforts to build sustainability into curricula and research. In 2010 WMU students became the first student body in Michigan to initiate and approve a fee that supports campus sustainability initiatives and provides funding for student research.