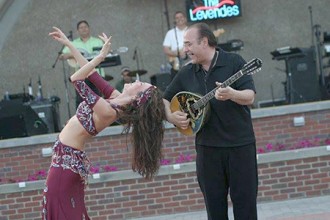 The band The Levendes performs at a previous Greek Festival.

The festival also will offer more traditional Greek entertainment during the day, including several performances from Detroit's The Levendes, a full Greek orchestra that will be accompanied by Greek dancers and belly dancers, as well as a slew of authentic Greek food and beverages. This year, the West Michigan School of Middle Eastern Dance also will be featured.

The festival's main staple—handmade food from Stacy Skartsiaris, owner of Theo & Stacy's Restaurant—will include popular items such as loukoumathes, a dessert similar to an elephant ear that is deep-fried and covered with honey and cinnamon; mousaka, a Greek casserole; spinach pie; grape leaves; and Skartsiaris' cookies.

Alcohol will include Ouzo, a Greek licorice liquor, and the Dionysos Wine Garden featuring Greek wines.