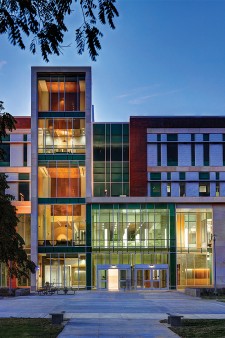 LEED—Leadership in Energy and Environmental Design—is the national benchmark for the design, construction and operation of high-performance green buildings. Certification accredits buildings that meet rigorous standards for sustainability, water and energy efficiency, resource selection and environmental quality. The Sangren gold designation brings the number of LEED certified buildings on the WMU campus to nine, with a dozen more still in the certification process.

"We've been patiently waiting for this terrific news, knowing that Sangren not only meets, but also exceeds the high standards set by the USGBC for LEED Gold," says WMU President John M. Dunn. "Sangren Hall is at the heart of our campus, physically, and it is emblematic of our commitment to keep sustainability at the core of everything we do."

Home to the College of Education and Human Development and the Department of Sociology, the 230,000-square-foot Sangren Hall was completed in 2012 at a cost of just under $60 million. It sits at the center of the WMU campus and is one of the University's most heavily used classroom buildings.

Sangren Hall's architect was SHW Group of Berkley, Michigan, while Miller-Davis Co. of Kalamazoo constructed it. Together they created a facility that has more than four dozen classrooms, thousands of instructional seats and a large grants and research center as well as clinical and office space for several programs. Since its opening, the building has been recognized with more than a half dozen design and construction awards.

According to Peter Strazdas, WMU associate vice president for facilities management, Sangren was built with the goal of achieving LEED gold certification, and even after its 2012 opening, major sustainability features were added to complete the building's green qualities. He calls the facility "one of the most energy efficient on our campus and in the state of Michigan."

Among the many sustainability features that led to gold certification are on-site storm water retention, and 975 rooftop solar panels with a 1/4 megawatt annual output that satisfies a good share and at times more than 100 percent of the building's electrical needs during high peak import times.

Sustainable material, including bamboo wood veneer on doors and millwork and cork and terrazzo flooring was used throughout the building. Salvaged granite was used for exterior walkways, benches and the water feature outside Sangren. Sedum plantings cover a low roof and entry canopy on the south side of the building. The sedum-planted "green roof" is one aspect of the site's stormwater management system.