Dr. Carolyn J. Harris, professor and undergraduate advisor in the Department of Spanish, died at Bronson Healthcare. She was rushed there after being found in the pool at the Maple Street facility where she regularly swam. She was 65.

Visitation information will be announced later this week. Memorial gifts in Harris's name may be made to the Emeriti Scholarship in the Department of Spanish. Online remembrances by WMU colleagues may be read visiting the News section of the Spanish department website at wmich.edu/spanish. 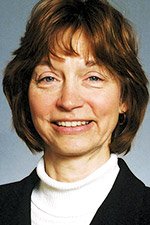 A WMU faculty member since 1985, Harris served the Department of Spanish as a teacher, advisor and researcher.

She was undergraduate advisor to Spanish students from 1987 to 1999 and became a co-advisor for its 300 Spanish majors and 275 minors in 2003. Harris was still serving in that capacity at the time of her death. Her classroom duties included coordinating the Spanish Composition 3160 class since 2009.

Harris served on several dissertation committees and from 1999 to 2001, before the Spanish department was formed in 2003, headed what was then the Spanish section of today's Department of World Languages and Literatures.

She also was the first faculty director of the University's study abroad program in Burgos, Spain. She directed that program from 1999 to 2001 and again from 2005 to 2007.

Harris was recognized for her superior classroom skills when she was selected as a recipient of a WMU Alumni Association Teaching Excellence Award in 2002. At the time, she was one of only 129 University scholars to have received the honor in the award program's 35-year history.

A specialist in contemporary peninsular literature and women's studies, Harris focused her research on 20th-century and current Spanish theater with an emphasis on women writers. In addition to receiving numerous scholarly honors and research awards from WMU, she wrote one book and co-wrote another as well as wrote numerous bibliographies, journal articles and reviews.

Her professional activities included work on the editorial board for Estreno, a journal of contemporary Spanish theatre; as a reader for the Spanish Advanced Placement Exam; and as a chair or member of numerous departmental and College of Arts and Sciences committees at WMU.