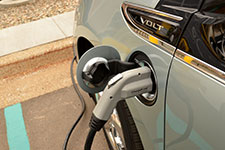 Photo of a charging station at WMU.

KALAMAZOO—For students who have an electric car and are going to college, there are few better places in the United States than Western Michigan University.

That's the message of an international transportation news source that recently ranked WMU as one of the nation's most "Electric Vehicle friendly" colleges. WMU placed fourth on the list released in September of Transport Evolved, a news site based in Great Britain that based its rankings on data from ChargePoint, a nationwide network that tracks the availability of EV charging stations.

Transport Evolved reported that according to ChargePoint, the number of electric car charging stations located at U.S. universities and colleges has risen by an impressive 35 percent in the past 12 months, up to 1,134 charging stations this year compared with just 838 last year.

And what began as a trend focused in California, now only includes two of that state's campuses on the list of schools with the most opportunities for students, faculty and staff to charge their vehicles. The top five schools and the number of charging stations they support are:

"Although MIT might be a foregone conclusion given its area of expertise, the University of Western Michigan (sic) also has a good reputation for electric vehicle support, as well as its well-known electrical engineering department and relative proximity to the Lansing, Mich., plant where the famed GM EV1 was made," reported Transport Evolved. "Fifteen of the 22 charging stations on the WMU campus are powered by a 50 kilowatt photovoltaic solar panel array, meaning staff and students can get a truly zero emissions charge while they work or study.

The complete Transport Evolved posting can be found at bit.ly/1o0qk6N.