WMU philosopher-ethicist to be honored as an emerging scholar 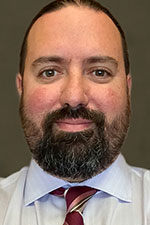 Dr. Fritz Allhoff, who in 2013 received a $500,000 National Science Foundation grant to study the ethics of cyberwarfare and had a book on the ethics of torture published, will be presented the 2014-15 Emerging Scholar Award during WMU's academic convocation ceremonies at 2 p.m. Friday, Oct. 10, in the Dalton Center Recital Hall. The event will feature WMU President John M. Dunn's State of the University address as well as the presentation of several other campuswide awards honoring Distinguished Faculty Scholars, Distinguished Teaching Award recipients and those being honored with Distinguished Service Awards.

Allhoff's book, "Terrorism, Ticking Time Bombs and Torture," was published by the University of Chicago Press. He also coauthored a scholarly book, "What is Nanotechnology and Why Does it Matter?: From Science to Ethics," which was published in 2012. Allhoff also has edited nine scholarly volumes, nine teaching-oriented volumes and three trade publications and has published 17 peer-reviewed articles in top-ranked journals and 15 invited journal articles, seven as the single author.

Allhoff also has 10 book chapters to his credit and has given presentations at over 60 national and international conferences. He has acted as conference or session organizer at over 20 national and international events and as a reviewer for both journal and book publications for multiple journals and presses. He is managing editor for 13 different publication series on topics ranging from nanotechnology to the extremely popular "Philosophy for Everyone" series.

"Dr. Allhoff's research and productivity is nothing short of incredible," wrote one nominator. "There is simply no manner or research productivity in which he has not extensively engaged."

Allhoff was cited for not only the sheer quantity of his research output, but also its quality, breadth and reach.

Allhoff joined the WMU faculty in 2005 and has served as director of graduate studies since 2008. He also has been director of the Medical Humanities Workgroup since 2010, director of the History and Philosophy of Science Workgroup from 2006-10, and adjunct assistant professor for the Mallinson Institute for Science Education from 2007-10. He earned his bachelor's degree from the College of William and Mary in 1998 and his master's and doctoral degrees from the University of California at Santa Barbara in 2001 and 2005, respectively.

In addition to his duties at WMU, Allhoff has served as a research fellow at the Centre for Applied Philosophy and Public Ethics in Canberra, Australia, and a visiting associate professor in the University of Michigan Department of Philosophy. Earlier this year, Allhoff received his juris doctor degree from the University of Michigan School of Law. He is now serving a judicial clerk for the Honorable Craig F. Stowers, an Alaska Supreme Court justice, and completed an internship with the Honorable Helene N. White, a U.S. Court of Appeals judge with the Sixth Circuit Court in Detroit.

"There is not a more energetic, professional or productive scholar than Fritz," wrote another nominator and longtime colleague. "Even as a graduate student as U.C. Santa Barbara in 2003, Fritz had the foresight to be concerned with ethical issues arising from emerging technologies and, given his background in both science and philosophy, has proven to be well equipped in addressing such daunting issues."