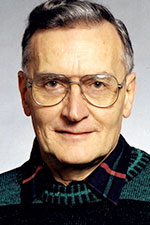 KALAMAZOO, Mich.--Curtis Curtis-Smith, an internationally known contemporary composer and pianist who taught at Western Michigan University for 43 years, died Oct. 10 at his home in Kalamazoo. He was 73.

Washington native Curtis-Smith joined the faculty in 1968 as an assistant professor after earning both bachelor's and master's degrees in music from Northwestern University. He also studied at the University of Illinois and taught briefly at Northern State College. He retired 43 years later in 2011 but remained involved with the WMU School of Music as an instructor and Composer in Residence.

A world-renowned performer and composer for solo, chamber and orchestral works, Curtis-Smith was at 38, the youngest WMU faculty member ever to be awarded the Distinguished Faculty Scholar Award, the University's highest academic honor. Also, he was honored in 1991 by the Michigan Association of Governing Boards in an award program that recognizes "a treasured Michigan resource and the promise it represents for our state's future."

He was the recipient of more than 100 grants, awards and commissions from organizations around the globe. They included: a Guggenheim Fellowship, an award from the American Academy and Institute of Arts and Letters, the Koussevitzky Prize at Tanglewood, the Prix du Salabert, an award from the Concorso Internazionale de Composizione, and grants from the Martha Baird Rockefeller Fund, the National Endowment for the Arts, the New York State Council for the Arts, the Arts Foundation of Michigan, the State of Michigan Governor's Award and commissions from the Barlow Endowment and Harvard University's Fromm Foundation.

In 2001, his Twelve Etudes for Piano were selected for the repertoire list for the Eleventh Van Cliburn International Piano Competition. After a Lincoln Center performance of the etudes in 2000 by Curtis-Smith's WMU colleague Lori Sims, New York Times reviewer Bernard Holland had high praise for the work.

"The textures and movement recall Chopin and Debussy," Holland wrote. "And yet the language is at a distance from their diatonic moorings. This contemporary composer likes dense, brittle chords, chiming ornamentation and is happy to use popular music and jazz as an undercurrent. These are interesting pieces."

Curtis-Smith's innovations included his 1972 invention of a technique of "bowing the piano," using flexible bows made of monofilament nylon line. His technique was subsequently used internationally by other composers.

Those who have performed compositions by Curtis-Smith included Leon Fleisher and Dennis Russell Davies. Curtis-Smith's own performances of his own work and other pieces included solo recitals at the National Gallery and the Phillips Collect in Washington, D.C., as well as performances with the Indianapolis, Seattle, Spokane and Kalamazoo Symphonies.

Among Curtis-Smith's fans was the late Irving S. Gilmore, Kalamazoo arts patron and the person for whom the Gilmore International Keyboard Festival is named.