KALAMAZOO, Mich.--The founding director of the Western Michigan University Bronson School of Nursing is one of four selected as 2014 Living Legends of Nursing by the American Academy of Nursing.

Dr. Bernardine M. Lacey is one of four extraordinary nurse leaders being recognized for their contributions to nursing and health care over the course of their careers. The designation as a Living Legend is the highest honor in the academy. The 2014 Living Legends will be recognized on Thursday, Oct. 16, during the opening night of the academy's Transforming Health, Driving Policy Conference in Washington, D.C. 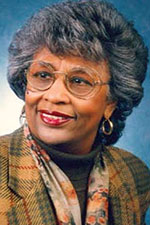 Lacey served as the Bronson School of Nursing's director for five years, helping to shape a vision of community nursing at the newly established school. She left the University in spring 2000. A permanent endowed chair in the school, The Bernardine M. Lacey Endowed Chair, was created in her honor with the help of a $1.5 million anonymous donation in 1998.

Lacey is credited with starting the movement to include care of the underserved in the nursing curriculum. Because of this movement, the profession is better prepared to care for the most vulnerable in American society.

Also honored as 2014 Living Legends were Kathleen Dracup, an educator and researcher with almost 50 years of experience in cardiovascular nursing and research in the care of patients with heart disease; Barbara Durand, who has spent her entire career advocating for a greater role of nurse practitioners in health care and advancing the field of pediatric nursing; and Colleen Goode, a distinguished research and practitioner whose quantitative research has led to more cost-effective care and better health outcomes in the United States and abroad.

Since the recognition started in 1994, eighty-eight Living Legends have been selected. All Living Legends have distinguished careers that have improved the health of the nation through notable contributions to nursing practice, research and education.

"While all of the academy's fellows have made significant contributions to improve health and health care," says academy President Diana Mason, "these four are particularly noteworthy for work that has been impressive, enduring and historic."

The academy's board of directors recognizes a small group of fellows as Living Legends each year. To be eligible, a Living Legend must have been a fellow for at least fifteen years and have demonstrated extraordinary and sustained contributions to nursing and health care throughout their career.

The American Academy of Nursing serves the public and the nursing profession by advancing health policy and practice through the generation, synthesis and dissemination of nursing knowledge. The Academy's more than 2,200 fellows are nursing's most accomplished leaders in education, management, practice and research. They have been recognized for their extraordinary contributions to nursing and health care.