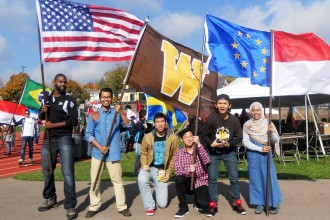 WMU students participate in the University's annual parade of flags.

Although not reflected in the report, University officials note that WMU's international student body has continued to grow this fall at an even higher rate. This fall's enrollment data shows an additional 9.8 percent increase compared to 2013-14, with 1,854 international students representing 100 countries now studying on campus.

The University's recent increases are part of a national trend reported in the Open Doors Report, a census published annually by the Institute of International Education with support from the U.S. Department of State's Bureau of Educational and Cultural Affairs.

It found that the number of international students at U.S. colleges and universities increased in 2013 to a record high of 886,052.

Those students from around the world contributed nearly $27 billion to the economy as well as contributed to America's scientific and technical research. By studying in the United States, they also brought international perspectives into American classrooms, which helps prepare U.S. undergraduates for global careers and often leads to longer-term business relationships.

Dr. Wolfgang Schlör, WMU associate provost for the Haenicke Institute for Global Education, says that the University's growing number of international students showcase some areas of special focus as well as national trends.

In September, the University welcomed scores of new students: 101 from India (271 total), 49 from Saudi Arabia (456 total), 29 from Brazil (95 total) and 26 from Iraq (86 total). These increases are bolstered by growth in the University's Fulbright student population, which currently stands at 38 Fulbright Fellows in 13 academic programs who represent more than 27 countries.

In addition to WMU's degree-seeking students, Schlör points out that the Center for English Language and Culture for International Students—CELCIS—enrolled 212 full-time students this fall and a higher enrollment is anticipated for spring 2015. Upon completing their English language training through the center, he notes that most CELCIS students remain at WMU to pursue an undergraduate or graduate degree.

To round out the details on WMU's Open Doors international engagement figures, Schlör says the campus hosted or employed 162 international scholars in 2013-14, compared to 167 the previous year. These scholars represented international tenure-track and visiting faculty members, research staff, and other visitors.

The number of U.S. students engaging in study abroad that year increased by 2 percent to a total of 289,408. WMU sent 558 students abroad in 2012-13, a slight decrease over the previous academic year.

WMU awarded nearly $500,000 in student scholarships for study abroad during the 2012-13 year, with $400,000 coming from University sources. The WMU President's Grant for Study Abroad and the Haenicke Institute for Global Education Scholarship for Study Abroad have been particularly influential in spurring the growth in study abroad enrollment.

Committed to increasing that enrollment among all WMU students, the Haenicke Institute and its Study Abroad unit in fall 2013 joined Generation Study Abroad, a five-year initiative launched by the Institute of International Education with the goal of doubling the number of U.S. students studying abroad by the end of this decade.

One of the resources provided by the institute is a free book that is now available to all WMU students. Titled "A Student Guide to Study Abroad, it is available for download at wmich.edu/studyabroad/guide.

Just this week, NAFSA—the Association of International Educators—released its annual analysis outlining the economic value international students and their dependents contribute to the United States.

For the 2013-14 academic year, the most recent year for which figures are available, international students and their dependents contributed $26.8 billion to the U.S. economy, and NAFSA estimates that 340,000 jobs were created or supported during the same time frame.

According to the NAFSA report, Michigan's Sixth Congressional District, in which WMU is located, has a total international student enrollment of 2,825 students. They generated more than $77 million of activity in the local economy this past year and about 1,071 jobs stemming from direct and indirect services.