Daniel Floyd with his invention, SpeechMasterPro

KALAMAZOO, Mich.—Patent No. 20140287385 has been issued to Western Michigan University marketing student Daniel Floyd for his invention SpeechMasterPro, a device that assists those with speech impediments, as well as others seeking to improve their articulation and elocution.

"This patent validates the design of my product and my hard work to this point," says Floyd. "It will also make it easier to speak with future influencers and supporters and grow my business."

Floyd's SpeechMasterPro is the classic necessity-is-the-mother-of-invention creation. The WMU sophomore was born with a disorder that makes it difficult for him to enunciate certain words and sounds and began developing the speech aid when he was in high school. Last year, he participated in WMU's student business accelerator, Starting Gate, to help take his business to the next level while his patent was pending. 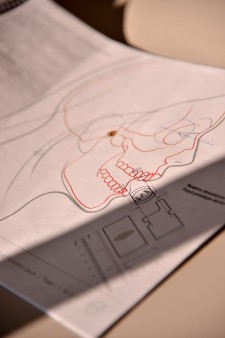 SpeechMasterPro assists people with speech impediments as well as those looking to improve enunciation.

"Starting Gate provided me a great environment to share my ideas with other entrepreneurs and obtain valuable feedback," says Floyd. "I would like to thank Dean Kay Palan and WMU for supporting my efforts."

Floyd's device is of particular interest to those who use their voice to make their living, including public speakers and voice-over artists. His company was recently featured in Voice Over Times as a company to watch.

Floyd has sold dozens of the speech aids, which can be purchased on speechmasterpro.com. The receipt of the patent is a big step for Floyd's company, and he is looking forward to growing his business by developing alternate distribution channels, such as retail outlets.

"We at Starting Gate are so proud of Daniel's hard work and dedication to launching his product," says Lara Hobson, director of operations for Starting Gate. "His story of how he came to create SpeechMasterPro and his work ethic are truly inspiring. It is rewarding to see one of our student entrepreneurs reach this level of success."

Speech therapy has been a part of Floyd's life since childhood. Speaking clearly was a struggle for Floyd, and therapy helped him immensely. Yet when he was younger and seeking to improve his speech, he was surprised that there was little to nothing available in the marketplace to aid him in overcoming his speech impediment.

His "aha" moment came while he was at home watching "The Great Debaters," a movie starring Denzel Washington.

"Denzel had five debaters practicing for debate, and they were practicing with a radish in their mouths," Floyd explains. "The radish forced the debaters to over enunciate their words and sounds, so once they took the radish out of their mouth, because of muscle memory, they would pronounce words as if the radish were still there." 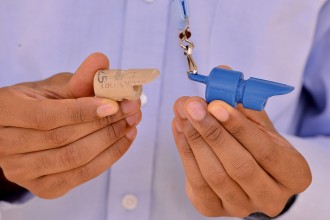 Floyd compares his cork prototype to the finished product.

After seeing the movie, Floyd, then 15 years old, scoured his parents' refrigerator for a radish, but settled for a wine cork. He began practicing speaking while biting the wine cork and noticed an improvement in elocution. He says he was training the muscles of his mouth and jaw to help him articulate words more clearly.

That led to the notion that perhaps a speech aid like that, if not already on the market, could be marketable.

He began collecting wine corks from area restaurants, reshaping them to rest more naturally between the front teeth, thereby creating the first SpeechMasterPro prototype. He invited neighbors, friends and others to test the device, which is shaped somewhat like a whistle.

"I got good feedback," he says.

After conducting a patent search, which came back clear, and getting his parents involved with his ideas, Floyd applied for two patents—a design patent, which was just granted, and a utility patent, which is pending.

A Chicago design firm, PDT, helped him come up with a version of the SpeechMasterPro that could be mass produced, and Floyd and his father, Dwight, found a manufacturer, Accurate Products, which agreed to fabricate several Food and Drug Administration-approved silicone prototypes.

The driving force behind Floyd's invention is very personal.

"It was just difficult for me to be understood in general, so when I was in middle school and in high school, it was really tough because of bullying," says Floyd. "The hardships I faced while being bullied are my motivation; helping others to get past their speech impediments is really fulfilling."

Starting Gate is a student business accelerator that gives students rich and valuable resources to develop their startup companies. Located in the Haymarket Building in downtown Kalamazoo and operated by the Haworth College of Business Center for Entrepreneurship and Innovation in partnership with the Western Michigan University Office of Community Outreach, the accelerator is open to all WMU students through a competitive application process in which students must demonstrate a promising idea for a product or service. Starting Gate provides a fast track to business launch. There are currently five other companies with patents pending who have participated in Starting Gate.