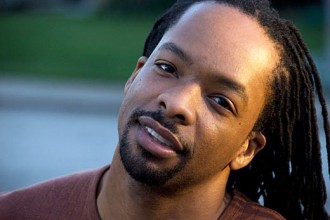 KALAMAZOO, Mich.—An author who won the American Book Award will be the next speaker in the spring 2015 Frostic Reading Series at Western Michigan University.

Jericho Brown, an assistant professor of creative writing at Emory University, won the American Book Award in 2008 for his first collection of poetry, "Please," and will read from his works at 8 p.m. Thursday, Feb. 26, in the Little Theatre. The event is free and open to the public.

In addition to the American Book Award, Brown is the recipient of the Whiting Writers' Award and fellowships from the Radcliffe Institute for Advanced Study at Harvard University, the National Endowment for the Arts, the Bread Loaf Writers' Conference and the Krakow Poetry Seminar in Poland. His second poetry collection, "The New Testament," was published in 2014.

The Frostic Reading Series presents acclaimed creative writers from across the nation and beyond. Every year, a diverse range of readings that encompasses poetry, fiction, nonfiction and drama attract both campus and off-campus audiences.