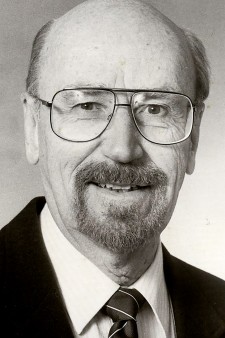 Hamner joined the WMU faculty in 1956, the year before WMU became Michigan's fourth public university. He taught history until his retirement in 1992 and remained in Kalamazoo for the next 23 years, expanding his scholarly reputation and building on a lifetime of volunteerism and philanthropy. He was active with the WMU Theatre Guild, Emeriti Council and Partners in Dance, and he continued to serve on the Department of History's advisory council.

Through an endowment he established in 2000, the annual H. Nicholas Hamner Lecture brings renowned historians to campus each year for a public lecture designed to explore a topic of current interest to the community as well as raise the profile of history as a discipline. Hamner also established a number of student scholarships for undergraduates studying history, and he endowed a WMU Medallion Scholarship—the University's top scholarship for incoming undergraduates.

Hamner, a specialist in modern European history with a focus on 19th century British history, led WMU group tours of the British Isles for more than 15 years and also served as academic leader for seminar tours of the Mediterranean region. In the 1960s he pioneered coursework on African history. Later, in the 1980s, he developed WMU's first courses on the modern Middle East and on contemporary history.

His service to the University included some two decades as a member of the Faculty Senate and service on most of that organization's councils as well as on its executive board. He also was a longtime active member of the local chapter of the American Association of University Professors.

During his tenure, Hamner received a number of awards that allowed him to expand his academic credentials. They included Fulbright awards to study at Scotland's Edinburgh University and at Taiwan's Tunchai University. He also received a grant to take part in a Bible and archaeological field school in Jerusalem.
He was a graduate of Emory University, where he earned both bachelor's and master's degrees. The Alabama native went on to teach at Auburn University for three years before enrolling at Ohio State University, where he earned a doctoral degree in 1957. He was a member of the American Historical Association; the Michigan Academy of Science, Arts and Letters; and Phi Alpha Theta, a national history honorary society.

Burial is scheduled to take place this week in Midway, Alabama. A memorial service is scheduled for 3 p.m. Saturday, Feb. 28, in the Kiva Auditorium at Friendship Village, 1400 North Drake Rd., in Kalamazoo.