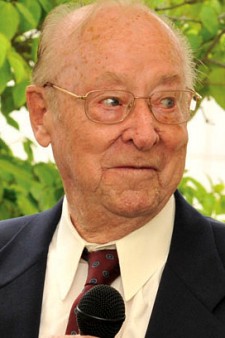 Kalamazoo broadcast pioneer Carl E Lee, who with his late wife Winifred Lee was the namesake for Western Michigan University's honors college, died Feb. 22. He was 96.

Lee worked for 60 years in the radio and television broadcasting industry and was president and CEO of Fetzer Broadcasting Co. He enjoyed a longstanding and strong relationship with the University, serving on the board of the WMU Foundation and actively supporting a number of initiatives.

In 1988, Lee and his wife, Winifred, who died in 2012, pledged $500,000 for construction of a home for what is now the Carl E and Winifred Lee Honors College. The building was completed in 1990, and in late 2012, a $1.1 million gift from the couple made possible a renovation and expansion of that original building.  The Lee Honors College will be the site of a March 14 public memorial service for Carl Lee.

"With the death of Carl E Lee, we have lost a great friend to Western Michigan University and a wonderful supporter who truly understood the value and need for a strong honors component to undergraduate education," says WMU President John M. Dunn. "We'll remember him as a man who lived life fully and contributed so much to the betterment of all."

Lee joined the Fetzer Broadcasting Co. in 1939, shortly after graduating from the Michigan Academy of Radio Science. The move launched his lifelong association with John E. Fetzer, who owned both a Midwest television and radio empire and was the owner of the Detroit Tigers.

Lee moved quickly up through the Fetzer organization and by 1958, was executive vice president and general manager of the company. In 1973, he became president of both Fetzer Broadcasting and Fetzer Television Co. The companies included what are now WWMT-TV and WKZO radio. Lee also headed up six other CBS affiliates around the nation.

Lee's involvement with the broadcast industry's professional organizations was extensive. His service included roles as president or director of the Broadcasters Foundation, National Association of Broadcasters and National Broadcast Pioneers. He was chairman of the CBS Television Affiliates Board and was instrumental in establishing the Region 4 Emergency Broadcast System and inspecting early Radio Free Europe facilities.

Lee was the recipient of a 1990 Lifetime Achievement Award from the Michigan Association of Broadcasters. The organization continues to honor Lee annually by offering its Carl E Lee Broadcast Engineering Excellence Award.

Lee is survived by his daughter and son-in-law, Cheri and Jeffrey Weedman of Cincinnati, and two grandchildren.

A public memorial service is set for 10:30 a.m. Saturday, March 14, at the Lee Honors College. Guests may park in Lot 41, which is behind Sangren Hall. A shuttle will run from Lot 41 to the honors college.

Memorial donations may be directed to the Carl E and Winifred Lee Honors College or Kalamazoo First Presbyterian Church.